For the majority of the world, Hormel Foods Corp. is most recognizable through one brand. That brand — which Monty Python parodied in a famous 1970 sketch comedy, spawned its own museum in 2001, and became synonymous with unsolicited emails — first propelled the company to international success during World War II and is a big part of the company’s image today. Spam, which turns 75 on Thursday, has been a Hormel staple for three quarters of a century. 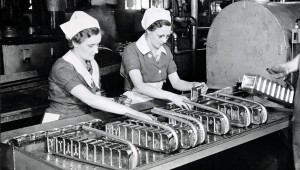 Hormel will celebrate Spam’s dodranscentennial on July 28 and show off Hormel’s corporate office expansion with a ‘Spamtastic’ celebration featuring Motown legend The Temptations. The party will include music, entertainment, Spam dishes and the history of the spiced ham.

“The Spam brand has been loved by millions of families for 75 years,” said Nicole Behne, Spam brand senior product manager.

While Hormel has sold more than 7 billion cans of Spam, it is still only produced in two U.S. locations, Austin and Fremont, Neb., and three other countries, Denmark, South Korea and the Philippines, according to hormelfoods.com. The Spam trademark is registered in more than 100 countries, and sold in nearly 50 nations. Though Spam comes in 14 varieties, Spam classic is still its biggest seller. With the ingredients of chopped pork shoulder meat, ham meat, salt, water, modified potato starch as a binder, and sodium nitrite as a preservative, Hormel claims Spam classic has remained relatively unchanged.

Hormel’s famous canned meat, which was born in Austin, has been a part of Americans’ lives since 1937. As a cheap source of protein, Hormel says Allied troops consumed it during World War II at a tune of 15 million cans per week at its peak, and families ate it after the war as the company touted its versatility through print, radio and TV advertising. 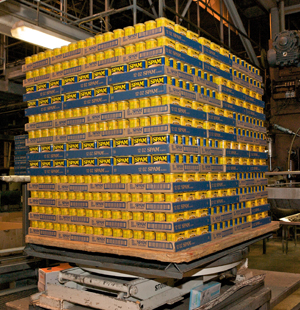 A pallet of Spam classic is ready to ship.

“I think we’ve just been woven into the American fabric of traditions,” Behne said. “That really helps us stay relevant.”

Furthering Spam’s relevance, Monty Python featured it in a 1970 sketch called “Spam,” in the 1975 film “Monty Python and the Holy Grail,” and in the 2005 Broadway play “Spamalot.” The Smithsonian Institution museum also inducted Spam in 1998, Hormel opened the Spam Museum in Austin in 2001, and in the late 1990s, dictionaries added another entry for spam; unsolicited bulk emails, which originated from the Monty Python sketch, according to Merriam-Webster. While Hormel isn’t as happy about spam’s newest definition — Behne calls that “a piece of the past” and they “keep moving forward” — the company embraced the fame and notoriety alike that came with the Monty Python jokes, and featured the original sketch at its Spam Museum.

“Monty Python has been great for us,” said Behne, adding that they don’t take themselves too seriously. “We know others are having fun, and we do as well. We’re a fun, light-hearted brand.”

Along with its place in popular culture, Behne credits family recipes and nostalgia as reasons for Spam’s continued success.

“If you look at our strong history, people pass down recipes, and there’s just that emotional response to the brand,” Behne said. “People have this great emotional connection, and I think that really is a great part of what we are.”

While the 2008 recession hit much of the country hard, Hormel has steadily increased profits each of the past three years, thanks in part to its low-priced, iconic brand, Behne says. 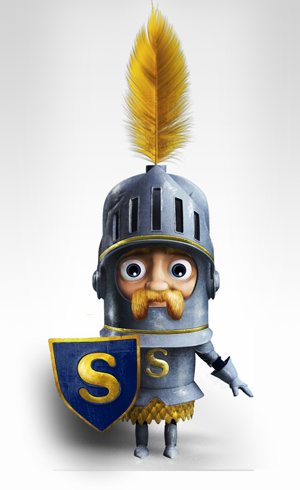 Hormel created "Sir Can-A-Lot" this year to market Spam online and on television to mark the canned meat's 75th birthday.

Though Spam is only one of many products in Hormel’s grocery division, the company has cited the canned meat as reason for the division’s success in recent years. That division, which accounts for 13 percent of net sales and is led by growth of Spam and MegaMex, has increased profits by 14.9 percent between 2007 and 2011 — from $141 million to $163 million — and net sales by 21 percent — from $879 million to $1.06 billion. During that same time, Hormel has increased annual profits by 57 percent — from $302 million to $474 million.

“Spam is definitely a big part of our grocery division, which continues to grow with new items, and we’re seeing some growth to the brand,” Behne said.

A catalyst for that growth, aside from the recession, has been a marketing campaign Hormel launched in the past few years. The company created the Spam spokescharacter Sir Can-A-Lot — a parody of Monty Python’s Spamalot — for TV and Internet advertising, made a serious social media push and revamped its website, spam.com, which scrolls up and has more than 3,000 recipes, according to Behne.

Hormel is using the spokescharacter on TV ads across the country, and especially in the Southeast U.S. and the east and west coast, Behne said. In what she calls a digital, grassroots effort, Hormel is advertising Spam on sites like Google, Facebook, Hulu and AllRecipes.com, all of which direct consumers to spam.com. The brand is also on Twitter, has its own YouTube page, and has a Facebook fansite with more than 137,000 followers.

“Our Facebook fans have been fabulous,” Behne said. “They’re always there to cheer us on. There’s a lot of Spam lovers out there.”

From Facebook and other social media, to its website and spokescharacter, Behne said the rebranding has done a lot for the 75-year-old product, and she’s excited to see where it takes them.

“We’re really looking forward to the future of Spam,” Behne said. “It’s awesome to be part of it now.”

A staple in war and peace

Exactly 75 years ago Thursday, the first can of Spam luncheon meat rolled off the assembly line at the Geo. A. Hormel & Company plant in Austin. The canned ham became an instant success for Hormel — selling more than 40 million pounds of Spam in less than four years — which it credits to a clever trademark, a national advertising campaign blitz and a world war. 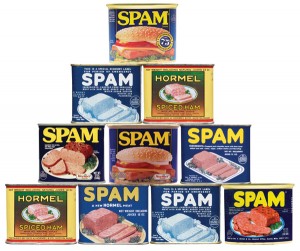 Spam has changed over the years.

Soon, according to Hormel Foods, competitors began producing similar spiced ham products, so the company decided it needed a catchy name for its original. Hormel offered a $100 prize to whomever came up with the best name for the canned meat, and Kenneth Daigneau — brother of Hormel Vice President Ralph Daigneau — won with the submission “SPAM,” a portmanteau for spiced ham.

Immediately, Hormel embarked on a national radio advertising campaign. Spam was soon featured in commercials during shows like “The Burns and Allen Show” with the show’s hosts, George Burns and Gracie Allen, and “Spammy,” the group’s mascot pig.

When Congress passed the Lend-Lease Act in 1941 — a program under which the U.S. supplied Allied troops before the country entered the war — Hormel began producing Spam for soldiers at a rate of 15 million cans per week, according to Hormel. But the canned meat’s abundance soon also brought it notoriety; as production increased, the canned meat gained notoriety as “the ham that didn’t pass its physical” and a “meatball without basic training,” Hormel says. Even President Dwight Eisenhower, in a letter to Hormel in 1966, joined in the ribbing, saying, “I ate my share of Spam along with millions of soldiers. I will even confess to a few unkind words about it — uttered during the strain of battle, you understand. But as a former Commander-in-Chief, I believe I can still officially forgive you your only sin: sending us so much of it.”

But Spam survived, and Hormel sold 1 billion cans of Spam by 1959, 3 billion by 1980 and 4 billion by 1986. According to Hormel, more than 122 million cans of the Spam family of products are sold worldwide each year, including 90 million in the U.S.

Where would a 75th birthday be without a party? 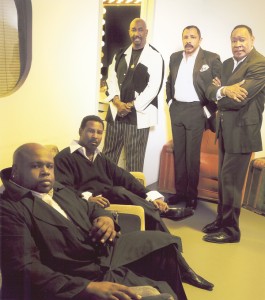 Hormel Foods Corp. announced the schedule for a ‘Spamtastic Grand Opening Expansion Celebration’ to mark Spam’s 75th birthday and show off Hormel’s corporate office expansion. The event — beginning at 4 p.m. on Saturday, July 28 — is headlined by Rock and Roll Hall of Fame R&B/soul group The Temptations. It will also include a self-guided tour of the corporate office expansion.

The event will take place outside, between the corporate office north and R&D buildings, 1 Hormel Place.

What: A celebration of Spam’s 75th birthday and Hormel’s corporate office expansion 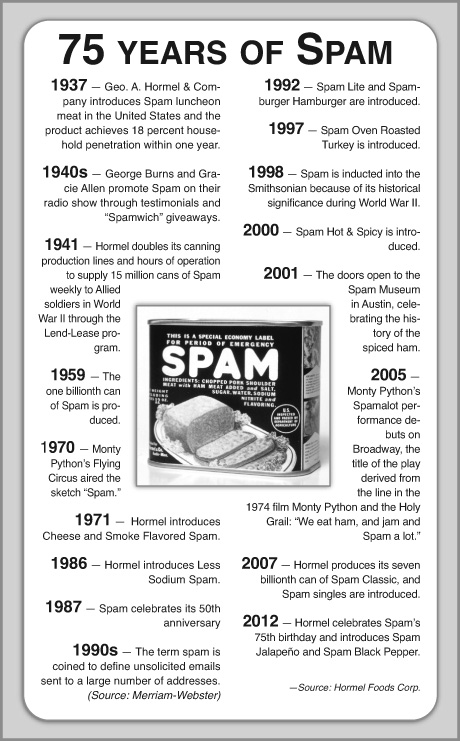