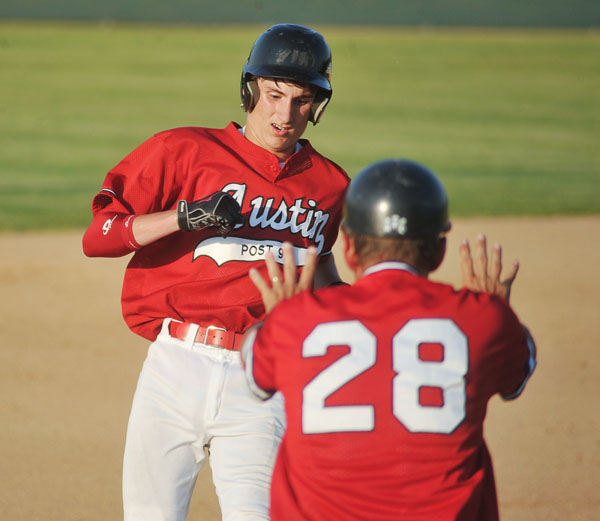 Austin's Nik Gasner pulls up for a triple during the second inning against Faribault in Legion baseball action Wednesday night at Dick Seltz Field. -- Eric Johnson/photodesk@austindailyherald.com

It’s been a whirlwind week for first baseman Zach Huntley and the Austin Post 91 baseball team, but it took a turn for the better when Huntley delivered a walk-off double to give Austin a 5-4 win over Faribault Post 43 in Dick Seltz Field Wednesday.

Huntley was facing a 1-2 count with runners on first and second with no outs in the seventh inning when he blasted a double to the gap in right-center to score Marcus Stoulil and give Austin (3-11 overall) its first win in its last nine games. 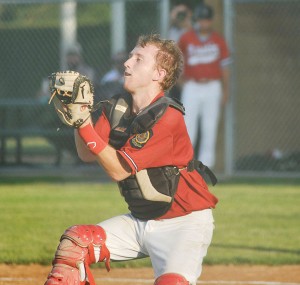 “It’s such a low that we’ve had. We needed something and we got a win,” Huntley said. “(The last at-bat) is a spot where the nerves are just popping and it’s not good. But when it hit it, I knew he wasn’t getting to that one and with Marcus’s speed, any base hit is gonna get him in.”

Huntley hit his first career homerun in the Mankato tournament this past Sunday, and now he’s hit his first walk-off RBI for the Legion team.

Faribault scored a run in the sixth to tie the game up, but Stoulil said he could see them starting to doubt the outcome when he got to second base in the seventh.

“I looked at a couple of them and they were like ‘uh oh.’ They knew it,” Stoulil said. “I have a ton of faith in (Huntley). I’ve been playing with him for so long and I was happy he was the one that was up. That fit him.”

Stoulil led off the bottom of the seventh with a single, but he almost ended the rally as quickly as he started it. Stoulil got a little too eager on a sacrifice bunt play and ended up hung between first and second. He took off towards second to beat the throw from the catcher and get a steal on a very close play.

“I don’t know what I was doing,” Stoulil said. “The baseball gods were with me on that one. I’ve caught a few breaks here and there and I caught a big one there. Once I got half way I figured I needed to go. I was a little lucky, but I’ll take what I can get.”

Austin took a 4-1 lead in the bottom of the second when Steven Clennon doubled in a run and another run scored on a groundout by Tommy Olmsted. Post 91 had just one hit over the next five innings as Faribault tied things up on a groundout in the sixth.

Faribault had runners second and third with one out, but Austin pitcher Isaac Schumacher, who picked up the win in relief, got a couple of groundouts to get out of the jam. 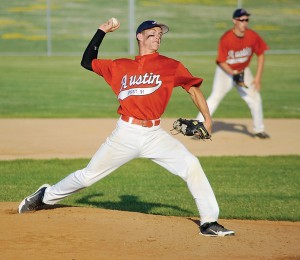 Schumacher, who will be a sophomore this fall, also forced a pair of groundouts with the go-ahead run in scoring position in the top of the seventh.

“Isaac is a pretty good kid,” Austin head coach Bob Stratton said. “He’s really good with mechanics, he throws repetitively and he throws over the plate. He neutralizes his age with that.”

Gleisner pitches Austin 16U to a pair of wins…