A history of the First National Bank

A reader asked about the history of the First National Bank, the bank once housed at 300 North Main Street — the corner of Main and 2nd Ave NE, north of the old courthouse square. Back when the bank was founded in 1868, the streets were Main and Bridge and at that time, north of the new courthouse square. Here is the early history from the 1896 ‘Souvenir of Austin’ pamphlet: 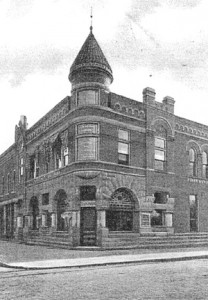 In 1896, a new building, shown here, was built to house First National Bank. The building, located at 300 N. Main St., has been recently restored to its original exterior. Photo courtesy of the Mower County Historical Society.

“The First National Bank is the oldest financial institution now doing business in Austin. It was organized in 1868 and its subsequent successful career has been a natural outgrowth of substantial development of the city and surrounding county. But few changes in its management have occurred since its organization, as O.W. Shaw has been president from the first and there have been but two cashiers. The present cashier, N. F. Banfield, succeeded H. W. Page in 1885. The First National Bank corner is one of the landmarks in the history of the city’s business interests, as it has been the site of all the bank’s transactions since its inception nearly thirty years ago. The original building was destroyed by fire one month after occupancy. The brick structure which was erected in its place did valuable service for many years and was one of the substantial blocks of the city. In order to meet the demands of an ever-increasing business the present year has witnessed the construction of a new and larger building of modern architecture. It has been built of brick with solid stone front and it is conceded on all sides to be the finest and most artistically designed business structure in Austin. With the new vault, together with new and modern furnishings, the bank is justly entitled to be ranked among the progressive and up-to-date financial institutions of the state.”

This Week at the HHH

•Monday: Austin Community Jazz Band concert in the Peace Garden at 7 p.m. Free and open to the public. Bring your own lawn chair. Rain location is Paramount Theatre.

Free concert in the Peace Garden: Tuesday, July 24 at 6:30 p.m. by Koo Koo Kanga Roo. This group has recently been featured at the Minnesota State Fair family stage and can be described as ‘Beastie Boys multiplied by Sesame Street.’ Bring your own lawn chair. Children must be chaperoned. Rain location is Paramount Theatre.

The People’s Quill: Flower the Cat Comes to Poetry