Couple says ‘I do’ over family graves 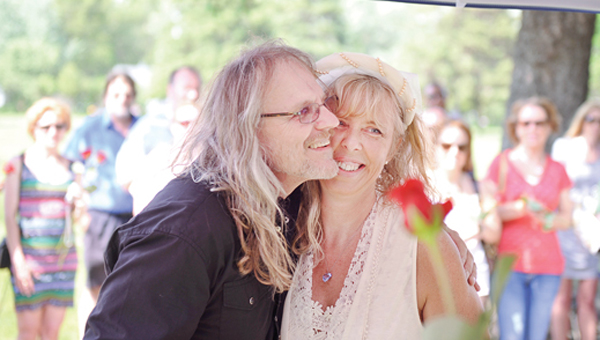 Diane Waller and Randy Kjarland were married Saturday afternoon at the graves of Diane's parents in Oakwood Cemetery. Just five rows straight in from there were Randy's parents. The couple decided to marry so they could included both sets of parents in their special day as well as other relatives all buried within short walking distance of the ceremony. -- Eric Johnson/photodesk@austindailyherald.com

Wedding bells rang out this weekend over the least likely place imaginable.

Diane Waller and Randy Kjarland gave their vows during a 3 p.m. wedding ceremony Saturday set beside their parents’ graves in Oakwood Cemetery. The idea sparked from the couple’s desire to include their parents, who had always approved of their relationship.

“How cool is that?” Waller, the bride, said. “To honor our parents and family, to have them with us in a weird sort of way.”

Although their idea brought varied reactions, Waller said, some were moved by the couple’s decision.

“Some people think it’s a joke, but it’s actually going to be very respectful of why we’re there,” Waller said before the ceremony. “Other people, when they hear our story, have cried.”

Waller and Kjarland were teenagers when they first dated. But they were too young for marriage then, Waller said.

“We broke up and went our separate ways,” she said. Thirty-five years passed. Waller moved to Colorado. Each married someone else, then divorced. And eventually, they found one another again.

“I looked him up,” Waller said. “I found one of his sisters on Facebook, found his phone number and eventually called.”

The two re-established contact, and soon got back together.

“Our moms would be so happy,” Kjarland had told Waller. Both had lost their fathers when they were young, and Kjarland had lived with Waller and her mother for a time.

“We felt that our parents and family should have been there,” she said.

During one of Waller’s visits to Minnesota last year, the couple decided to pay a visit to their mothers’ headstones. After they visited Kjarland’s mother’s headstone, Waller said, she needed to exit and re-enter the cemetery through the other gate to find her mother’s.

“I made him drive out and come back in through the other gate,” she said. “We ended up right back where we were. It was just one more wow moment.”

At a later visit, Kjarland knelt down in front of Waller’s parents’ gravestones and asked for permission to marry their daughter. After a moment, he produced a ring and proposed to Waller. They decided to have the wedding there, too.

“The more I thought about it, the more I liked the idea,” she said.

The couple had a headstone made up and placed beside their families, with both Waller and Kjarland on the same grave marker.

“I appreciate Oakwood Cemetery and Anderson Memorials,” Waller said. “They really expedited this headstone for us.” She added she’s never heard of anyone having a cemetery wedding before.

While both Waller and Kjarland were originally from Austin, Diane still has a home and job in Colorado. The same is true of Randy, but in Kasson. Waller said they’re still working out where to go.

Approximately 50 or 60 guests were expected Saturday, a number that grew over time.

“It started out being very, very small, but [it grew],” she said. And while guest lists can be fickle, there was a small, separate collection of a guests Waller knew would be present all along.

Those 11 people, close family of the bride and groom, were given a distinction of their own. Each received a rose to mark his or her grave.

Train fatality in Aurora is 2nd in about a month

AURORA, Minn. — For the second time in about a month, authorities in the northeastern Minnesota community have responded to... read more