Tunnels to the future

This story originally appeared in Progress 2012. Get a copy at the Austin Daily Herald.

Pulling up to the Akkerman campus on Mower County Road 2 outside of Brownsdale, one likely wouldn’t assume the family-owned company is world-class. 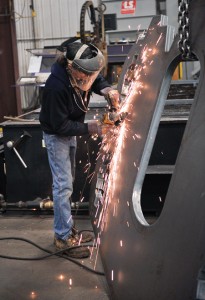 Tony Belden cleans the rough edges of a freshly cut piece of pipe jacking frame at Akkerman just outside of Brownsdale.

Tucked away in a grove created by trees and a curve in the highway, engineers, machinists and assembly workers design and manufacture pipe jacking and tunneling equipment used across the globe to install underground infrastructure.

While Akkerman has been in business for nearly 40 years, the company’s worldwide vision is rather recent, according to Vice President of Sales and Marketing Rob Tumbleson.

“We’ve been establishing relationships (internationally) with geographic representation,” Tumbleson said. “We’ve really concentrated on it in the last five years.”

In 2012, with 13 worldwide representatives, Akkerman will send sales staff to industry trade shows in Singapore, Brazil, Russia and the United Kingdom.

Tunneling into the future

Akkerman has four main product lines, and it specializes in equipment for pipe jacking — a trenchless method for installing pipes and casings — and other tunneling equipment, according to Tumbleson. The company manufactures equipment that installs pipe ranging from 4 inches to 14 feet in diameter. The tunnel boring machines, used for pipe jacking, excavate the ground while advancing forward off the pipe itself. 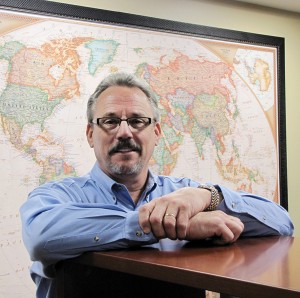 Akkerman also makes equipment that excavates at the opening of the tunnel while the tunnel ring is created behind it.

The company boasts of incredibly accurate, laser-guided equipment. The pipe jacking systems must be accurate so the sewer systems can maintain flow in the right direction.

“Everything is laser-guided,” Tumbleson said. “Everything we do is basically gravity flow installation. We’ve got to be extremely accurate and on the right grade to maintain flow.”

Some of the machinery can be operated from inside the actual pipe jacking or tunneling unit. An operator will actually sit inside the machine and guide it through the soil or sand.

Akkerman’s micro-tunneling systems are so advanced, though, that someone can operate the machine from above ground in a remote control container. The container is a small, air-conditioned room with computer controls that guide the machine through the ground.

This system is used in a high water table area because it’s generally not safe for an operator to be underground in those conditions.

The software used to control the machinery is developed at Akkerman by its own software engineers, Tumbleson said. Operating a micro-tunneling system, particularly from aboveground, requires incredibly advanced skills, according to Tumbleson, so operators undergo at least a year of training before they are qualified to operate the controls.

Along with competing in the industry on an international level, Akkerman officials have worked for nearly two years to roll out the Series II pipe jacking equipment. The Series I equipment was not fitting the needs of all of the company’s foreign customers, so the company decided to up the ante and compete in the world market.

“It’s been a major part of our work for the last year and a half,” Tumbleson said. “We’ve been expanding, modifying and upgrading our equipment to try and address the international market’s needs.”

Akkerman officials have been busy lately, according to Tumbleson. Not only did the company roll out its Series II system, but it also built a new corporate office building and announced an updated strategic plan. 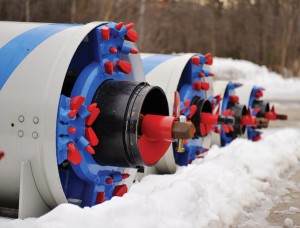 Akkerman has several sizes of tunnel-boring machines that it ships throughout the United States and the world.

The new building incorporates some of the pipe in the infrastructure.

“We wanted to be able to have a nice space to welcome guests,” Tumbleson said. “We incorporated a lot of the pipe used for sewer and water utility installation into the office structure.”

The new mission and vision statements were an important project for company officials, Tumbleson said, because they are trying to encourage employees to hold them accountable and embed the concepts into the Akkerman culture.

Signs detailing the new statements are posted in break rooms and workstations throughout the plant. The gist of the mission is to be goal driven for customer success, Tumbleson said.

“The goal is to have the whole group know what our vision is.”

As the company strives to achieve its goals and expand in the global market, its plans are to focus marketing efforts in the South American, Russian and Middle Eastern regions.