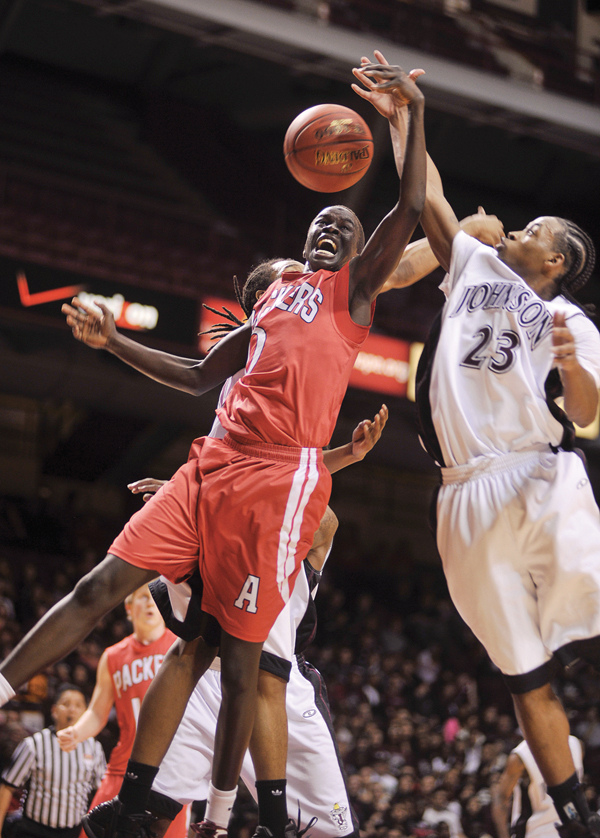 Austin's Goliath Oboyo reaches for a rebound with St. Paul Johnson's Darius Watson late in the second half of their opening round game in the State AA Boys Basketball Tournament in Williams Arena Wednesday. - Eric Johnson/photodesk@austindailyherald.com

MINNEAPOLIS — While the Packers saw their season come to an end in the first round of the Class ‘AAA’ state boys basketball tournament, they didn’t go out without a fight in a 71-66 loss to St. Paul Johnson in Williams Arena at the University of Minnesota Wednesday.

Despite trailing 64-52 with 3:35 left, the Packers (23-6 overall) stormed back into the game with a 9-1 run, but they couldn’t come up with two defensive rebounds off missed free throws by the Govs while trailing by three in the last 30 seconds. 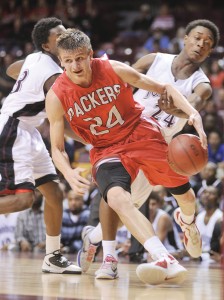 Austin's Tom Aase drives the baseline in the second half against St. Paul Johnson in the first round of the State AAA Boys' Basketball Tournament in Williams Arena Wednesday. - Eric Johnson/photodesk@austindailyherald.com

“The two rebounds really cost us a shot to have a chance at winning the game,” Austin head coach Kris Fadness said. “But at the same time we were dead in the water and down twelve with five minutes left. I’m just proud of our kids coming back and giving us an opportunity.”

As expected, the Govs provided full court pressure throughout the game and they forced 22 Austin turnovers, many of which they turned into breakaway buckets.

“They’re just good,” said Austin point guard Zach Wessels, who finished with 14 points, six rebounds and six assists. “We handled their press well at times, but they’re tough and they beat us fair and square.”

The Packers trailed by as many as six in the first half but Joe Aase, who finished with 25 points, nine rebounds and four blocks, hit a baseline three, a jumper and two free throws to put Austin ahead 37-35 at the break.

“I started feeling it a little bit,” Joe Aase said.

The Govs scored the next six points but Joe Aase hit another three to pull the Packers within one. The Govs answered with a big rally as Missori State recruit Marcus Marshall, who finished with 23 points on 8-of-14 shooting, scored eight points during a 12-3 run that made it 62-50 with 5:24 left.

“Johnson’s awfully fast and we had trouble all day getting back on defense,” Fadness said. “They thrive on turnovers for lay-ups and that’s their bread and butter. Our box and one slowed them down a little bit (in the second half) and they had to pass the ball around the perimeter, but you’ve got to give them credit for making plays.”

Wessels played for most of the second half until he had to take a rest while the Govs were putting together their late run as the Govs constant running was having an effect on him. 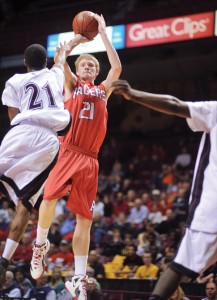 Austin's Joe Aase falls back shooting over St. Paul Johnson's Jalen Albritton during the first half Wednesday in the first round of the State AA Boys' Basketball Tournament at Williams Arena. - Eric Johnson/photodesk@austindailyherald.com

“If I made a mistake it was the fact that we should’ve subbed more and kept guys a little more fresh,” Fadness said. “Zach Wessels is a pretty special player and I got scared of taking him out of the game. I thought he was our ticket to handling their pressure but I ran him into a wall and he was gassed.”

Wessels wasn’t about to put blame on his coach.

“That’s partially my fault,” he said. “I have to be in better shape and I shouldn’t have been that tired. But we played a good game and it was a fun season.”

Senior guard Goliath Oboyo lifted the Packers in their late rally as he scored six points in the last three minutes.

“Oboyo stepped up at the end and took it the hole,” Joe Aase said. “He’s been great for us all year and I feel for those (seniors) not being be able to come back next year.”

Austin sophomore Bret Lukes almost stole an in-bounds pass with the Packers trailing 65-63 and 46 seconds left, but Johnson recovered and the Govs hit 6-of-8 free throws in the last 20 seconds.

While it has been 30 years since Austin last played in a state boys basketball team, the Packers, who graduate four seniors but bring back their top three scorers, hope that it’s a little bit sooner when they make their next state tournament appearance.

“This has been a great experience for our young guys and we know the expectations are going to be really high next year,” Fadness said. “We’re not going to run from it and we look to be back in this situation next year with different results.” 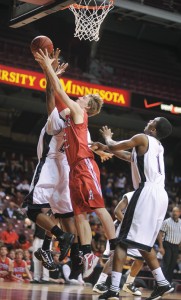 Austin's Zach Wessels reaches for a rebound against St. Paul Johnson in the second half of their first-round game of the State AAA Boys' Basketball Tournament in Williams Arena Wednesday. - Eric Johnson/photodesk@austindailyherald.com

Back from Afghanistan; Troops deployed for 9 months