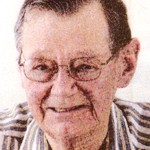 He was born June 23, 1929, in Owatonna, Minn., the oldest son of Elmer and Helen (Malakowsky) Schroeder. He attended school in Owatonna before serving with the Army Air Force from 1947 until 1949. He later served with the Army during Korea from 1951 until his honorable discharge in 1952. Roger married Jeanette “Pat” Anderson on June 28, 1953, in Austin. He was employed with Jostens in Owatonna for 27 years and also WSI in Owatonna. He later worked for Hostetter’s Jewelry in Omaha, Neb. Roger enjoyed making birdhouses, fishing, hunting and playing cards. He also enjoyed RV-ing, old-time and country music and crossword puzzles. He was a life member of VFW Post 1642 and a member of American Legion Post 228 of Waseca.

He was preceded in death by his parents; three sisters, Elaine Sobrack, Gladys Hagen, and Margie Johnson; and one brother, David Schroeder.