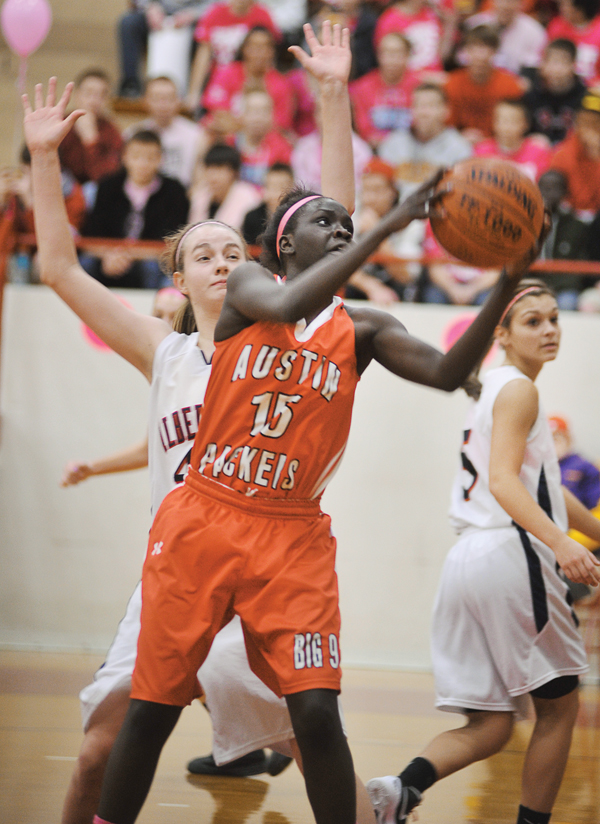 Austin's Babaye Oja takes a pass inside during the first half against Albert Lea Thursday night in Ove Berven Gym. - Eric Johnson/photodesk@austindailyherald.com

The Austin girls basketball team knew it had a good chance to end its three-game losing streak going into Thursday’s game, and it didn’t take any chances as it set the tone early when it opened its game against Albert Lea on a 16-4 run. 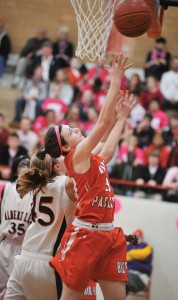 Austin's Alex Hansen reaches for a rebound during the first half Thursday night against Albert Lea in Ove Berven Gym. - Eric Johnson/photodesk@austindailyherald.com

The Packers went on to notch their third victory over the Tigers (2-17 overall, 1-11 Big Nine) this season by a final score of 56-32 in Ove Berven Gym on ‘Paint the Gym Pink Night’ Thursday.

“It’s been awhile and this was a big game,” said Austin forward Taylor Lady, who finished with 10 points, nine rebounds and five assists. “We knew we were gonna have a big crowd with the paint the gym pink and everything and we really wanted to win and we knew we could beat them.”

“I thought we had good energy and we got (AL’s high scorer) Bryn Woodside frustrated,” Austin head coach Gary Peterson said. “We needed to get a win to get some momentum. I challenged Taylor before the game to get some rebounds and she did a good job tonight.”

The LeRoy-Ostrander boys basketball team just missed out on getting their first conference win of the year when they let... read more