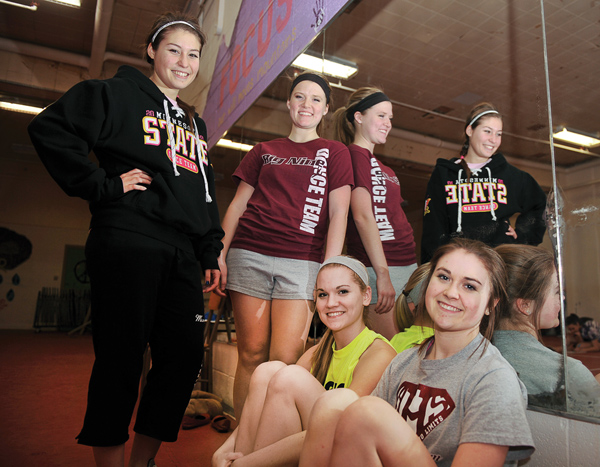 With its 10th straight trip to Class ‘AA’ state meet on the line, the Packer dance team will have plenty of motivation when they host the Section 1AA meet this Saturday at noon in Packer Gym.

But that doesn’t mean a straight trip will be a given for the Packers, as some tough teams have been added to the section this season. If the Packers want to get back to state, their work will be cut out for them.

“They say that once you’ve had something you want it back again,” senior captain Kathleen Collier said. “We want it back and we’ve been working to get it back. Words can’t describe the feeling you get dancing at state.”

While Austin head coach Jennifer Sims has coached some good teams over the past decade, she said this squad can match up with any of them.

“I think our girls are at the peak of any other team that I’ve coached here. They have every intention of repeating (a trip to state) on Saturday and if they do their best, I believe they will,” Sim said. “We have to be at our best and if we’re not at our top performance level, we won’t make it in the top three. There’s no room for error.”

The five dancers were involved in an auto accident before last year’s season that saw Bird and Chidester miss the entire season. Joseph and Zynda were able to fight through and compete last year, but Bird, who suffered a fractured vertebrae, couldn’t compete until this past summer.

“It’s awesome and it’s nice to back with my girls,” Bird said. “We all have pain, but we all have to push through it and work hard. It was hard at first to get my flexibility back, but throughout the season it’s been easier than expected.”

Chidester wasn’t able to compete during this season and she’ll miss the section meet, but she was able to perform this past weekend in the winter dance show. Just seeing Chidester on the floor was a big deal to the team.

“To have her for the show was inspiring to know that she was out there with us,” Zynda said. “(That night of the accident) is something I’ll always be connected to them with.”

As the Packers prepare for the section meet, they are feeling a little pressure. After all, they were all in first grade the last time an Austin dance team didn’t make it to state.

There is also the emotional impact for the seniors, who are finishing off a fantastic run together.

“It’s really emotional. Most of us have been dancing for 14 or 15 years and to let it go and not have this team any more will be really emotional,” Joseph said. “There’s a lot of pressure, because every year I’ve been on the team we’ve made it to state. If we didn’t make it, it would be sad. But if we give it everything we’ve got, there’s no way that we won’t go (to state).”

The Packers won the Big Nine meet for the third time in school history in Packer Gym two weeks ago and they’re hoping competing in their own gym gives them a boost this Saturday.

“The crowd gets kind of crazy and that some girls kind of rattled, but it’s a huge advantage to be on our own floor,” Zynda said. “We have an extremely hard section and our biggest goal is just to put everything on the floor and do the best we can.”

Regardless of what happens on Saturday, Sims is very pleased with were her program stands.

“We’re really proud of our team and the growth of our program,” Sims said.