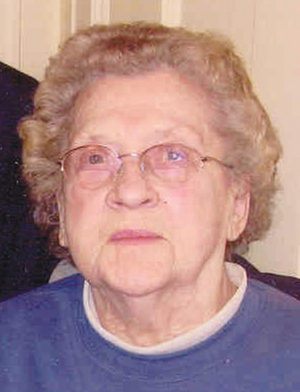 She was born Sept. 16, 1921, in Bismarck, N.D., to John and Frances Leif. After John passed away, the family moved to Menomonie, Wis., and then to Austin, Minn. Mary Frances went to Columbus Grade School and then St. Augustine High School where she graduated. She worked at the Dutch Maid Cafe, Kough Cab Company and the Hormel Company.

On Nov. 23, 1944, she married Lloyd William Cummings. They had three children, John “Shorty” William, Elaine and Robert. The family always worked together doing yard work, painting, cleaning the then Austin Savings and Loan (now First Farmers), and JC Penney when they were downtown. Mary Frances was a member of St. Edward’s Catholic Church.

A Funeral Mass will be celebrated 10:30 a.m. Thursday, Feb. 2, 2012, at St. Edward’s Catholic Church with Father Jim Steffes officiating. There will be a 6:30 p.m. wake service on Wednesday at Mayer Funeral Home where friends may call from 4 to 7 p.m. and also one hour before the service at the church on Thursday. Interment will be in Calvary Cemetery.