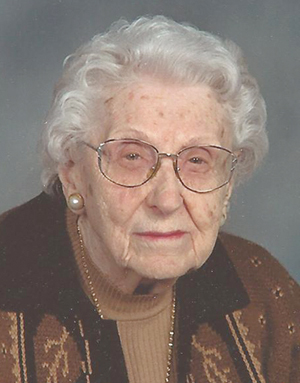 Leone Bertha Yonke was born Aug. 9, 1909, near Cresco, Iowa, in Howard County, to Frebert and Bertha (Baumgartner) Heinicke. She was baptized by Rev. John Pleiss of Immanuel Lutheran Church in Cresco. She attended grade school in Cresco, and in 1921 her family moved to Austin, Minn. She was confirmed at St. John’s Lutheran Church and graduated from Austin High School in 1927. After graduation, Leone worked as a telephone operator for the Bell Telephone Company for two years. She then worked as a cashier bookkeeper for the Interstate Power Company. Later, she worked as a bookkeeper for the Geo. A. Hormel Co. Leone was married to Emil A. Yonke on Sept. 12, 1937, at the St. John’s parsonage.

Leone enjoyed sewing for her daughters, vacationing at various lakes in Minnesota and traveling with her family. She belonged to the Business and Professional Women’s Organization, St. John’s Ladies Aid, Walther League and choir.

Following the death of her husband in 1984, Leone moved to the Cedars of Austin where she lived for 20 years. She enjoyed her independent living there and especially playing dominoes with friends. She moved to Oak Park Place Assisted Living in Albert Lea, Minn., in 2005. She lived at the Good Samaritan Society Care Center in Albert Lea since 2007. The family would like to thank the staff at Good Samaritan for the wonderful kindnesses and care she was given.

Funeral services will be 11 a.m. at St. John’s Lutheran Church on Friday, Feb. 3, with the Rev. Tom Ogilvie officiating. Interment will be at Oakwood Cemetery. Visitation will be held at the church on Friday morning from 10 a.m. until the time of the service. Clasen-Jordan Mortuary is in charge of arrangements.