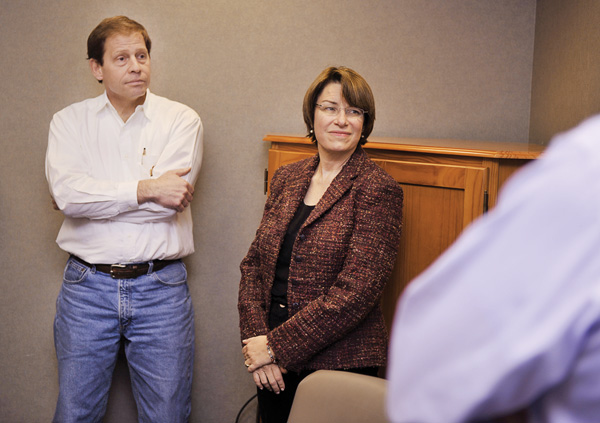 Setting the American economy back on track is near the top of the list for many legislators, and U.S. Sen. Amy Klobuchar, D-Minn., knows cities like Austin are integral parts of that process.

While Klobuchar has toured packaging companies before, she’s never seen one that produces pizzas, macaroni and cheese and other common food items. The tour was an interesting visual tour for Klobuchar and local city officials, including Mayor Tom Stiehm, Chamber Director Sandy Forstner and Development Corp. Director John Garry.

While cameras weren’t allowed, officials saw how 80,000 pizzas are made each day in one of two pizza production rooms. They saw how cheese is partitioned into packages, monitored, frozen and boxed. They saw robots, conveyor belts, countless stainless steel machines and more. However, the message was more important: Industrial jobs still need to be a key part of America’s economy.

One change Heimark has noticed is that young adults don’t view industrial jobs quite the way they used to. Heimark mentioned when he was younger, industrial factory jobs were still very desirable. That may be changing.

“It’s trying to figure out what the companies need to get the workforce they need,” Klobuchar said.

But Austin Packaging is still chugging along. In its 14-years under that name, the facility has had to evacuate for flooding four times, but it has stayed on its feet.

“We are so happy that they stayed,” Klobuchar said.

Klobuchar’s Made in America tour is designed to showcase successful Minnesota businesses and job creation. Since late October, she has visited more than 30 businesses across the state.

Klobuchar serves as chair of the Senate Subcommittee on Competitiveness, Innovation and Export Promotion. She has also introduced the Innovate America Act to promote innovation and boost America’s ability to compete in the global economy.