Feb. 11, 2012, marked the day to celebrate the life of Jane Ellen Eastman, 60, of North Mankato, Minn. The celebration was led by Pastor Randy Leib from Fountain of Life Church (Panora, Iowa) where Jane enjoyed worshiping God. 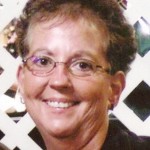 Jane was born April 18, 1951, in Osage, Iowa, to Herbert Blaine Eastman and Lorene Mae (Cockrum) Eastman. She was married to Arie J. Oudekerk for 27 years (and later divorced). In 1998, she met Phillip L. Henry and since lived in North Mankato, Minn.

Jane started her adult life as a cosmetologist and was a homemaker raising three children. She was proud of her success raising dogs in her ‘No-Nose Kennel’ that was USDA certified. Later, she graduated and became a travel agent at Sterling Travel in Austin. She then moved to St. Louis Park, Minn., to successfully complete her degree as a veterinarian technician. Jane was also an excellent child care provider, helping to raise numerous children throughout her lifetime.

Jane was preceded in death by her mother (Lorene) in 2004 and newborn brother (Kevin Lane).