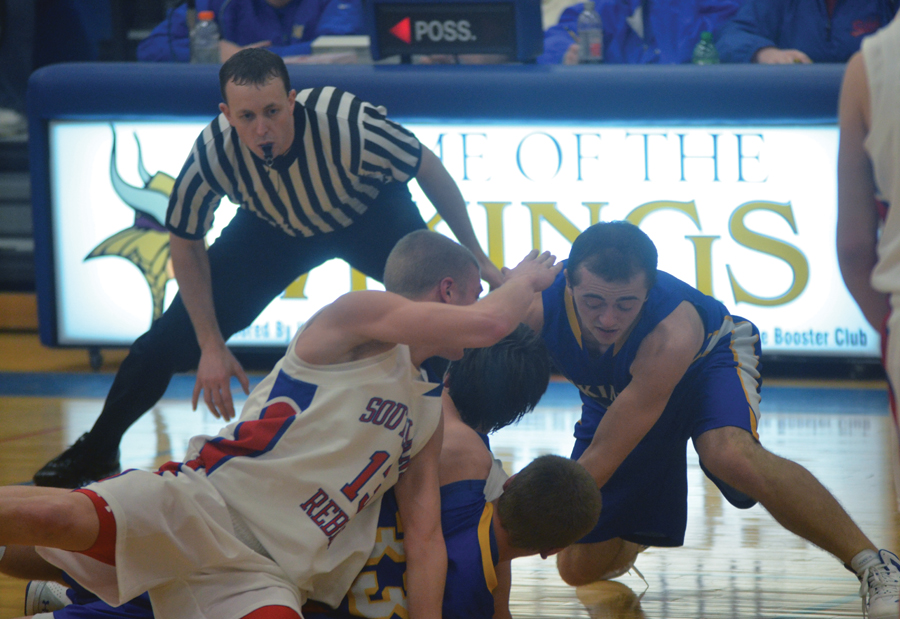 Hayfield's Bobbie Stephens, right, and Southland's Decker Bendtsen, left, battle for a loose ball near the end of Hayfield's 71-68 win over the Rebels in Hayfield Saturday. The play was ruled a jump ball. -- Rocky Hulne/sports@austindailyherald.com

HAYFIELD — In a highly contested game that went back and forth all night, it was the Vikings who prevailed in a 71-68 win over the Rebels in a boys basketball game in Hayfield Saturday.

Southland (13-7 overall) stormed back from a seven point deficit in the last minute as Mike Goergen hit a lay-up and Decker Bendtsen knocked down a three with 4.3 seconds left to make it 71-68. 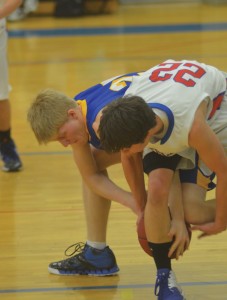 Hayfield (15-4 overall) missed three free throws in the last minute and nearly committed a turnover when a four player pile-up led to a jump ball in the Vikings’ favor with 30 seconds left in the game.

“We definitely made it as close as it could be,” said Hayfield sophomore point guard Cole Kruger, who had 21 points, six rebounds and four assists in the win, said. “They have a lot of talent, and it was a lot more higher scoring than I thought it would be. This is a big win, because we’re hoping for the top seed (in the subsection).”

Kruger had his way late in the game as he scored nine points in the last eight minutes of the game when Goergen had stop guarding him, due to picking up his fourth foul.

“Mike matched up with him well, he’s strong and he can jump,” Southland head coach Jon Thalberg said. “But once he got in foul trouble, we had to move him. Cole’s a heck of a player and he showed it tonight.”

Goergen also lifted the Rebels’ offense as he poured in 24 points. He helped lead the Rebels to a lead as big as six in the first half, but Hayfield made some defensive adjustments to contain him in the second half.

“They’re an athletic and well coached team,” Hayfield head coach Chris Pack said. “We don’t usually play zone, but they forced us to do it in the second half and it slowed them down a little.”

The Vikings, who have now won five straight games, did most of their damage inside as 1,000th point scorer Bobbie Stephens had just six points. Brady Stevens finished with 16 points and seven rebounds, and Brady Kramer used his driving ability to notch 22 points and grab six rebounds.

“I just took what they gave me,” Kramer said. 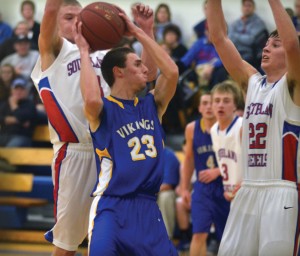 Nick Schmitz tied the game at 47 with a three with 14:40 left, but Hayfield scored again on an offensive rebound on its next possession when Stephens drilled a three to make it 50-47 after picking up a loose ball.