Come join us for some magical fish

In our commitment to support local artists, Matchbox Children’s Theatre returns to the historic Paramount Stage with “The Magic Flounder,” with an original script by Rochester-based playwright Joan Sween. 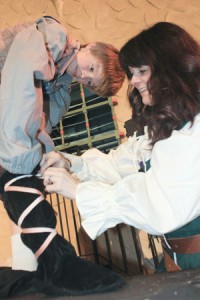 Lia Culbert, helps her son, Owen, put on his costume before rehearsing scenes for the upcoming "Magic Flounder" production at the Paramount Theatre. - Matt Peterson/matt.peterson@austindailyherald.com

According to her website, Sween is an experienced writer, having written plays since she was quite young.

She holds a Master of Fine Arts degree in theatre and English, and founded the Rochester Playwright Festival and Minnesota Writers’ Alliance. Her one-hour children’s play, “The Magic Flounder,” is a dramatization of “The Fisherman and his Wife,” the old tale of a magic fish, and what can happen when people are not satisfied with the good life they have.

Join us for one of the first performances of this fun, magical script. The show runs at 7 p.m. on Feb. 10-11 and 2 p.m. on Feb. 12. Tickets can be purchased at the Paramount Theatre, Sterling Main Street, and Austin Hy-Vee. For more information visit matchboxchildrenstheatre.org.

Hawaiian guitarist George Kahumoku, Jr. will be performing at the Paramount at 3 p.m. on Feb. 19. Tickets can be purchased at paramounttheatre.org or by calling 434.0934.

Focus on fiber to lower cholesterol

February is here, and with Valentine’s Day fast approaching it is not only the perfect time to show your love... read more