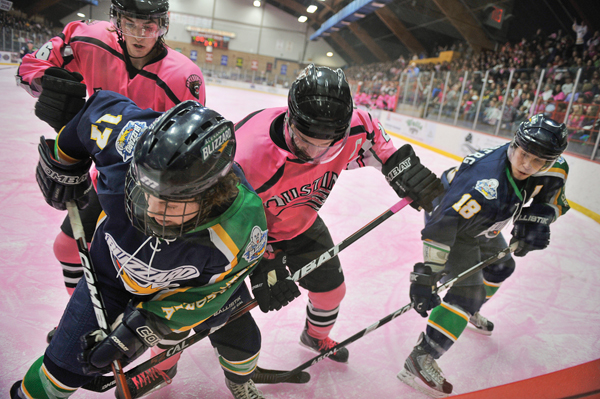 With a crowd of nearly 2,000 in front of them on ‘Paint the Rink Pink Night,’ the Austin Bruins didn’t disappoint as they piled on three third period goals to beat Alexandria 6-3 in Riverside Arena Saturday. 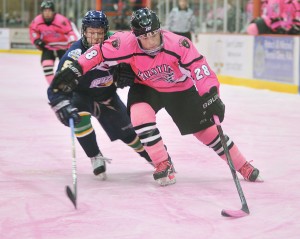 “We found our identity tonight,” said Brandon Wahlin, who added two assists to his team-leading 30 points on the season. “Coach told us in the locker room (before the third period) that just we’ve got to take it. We were a honey badger tonight and we didn’t care. We just went out there and won it.”

Austin put the game away when Matt Hansen crashed the net and scored on a rebound to make it 5-2 and Colton Kramer scored with 2:18 left in the game.

“They did a lot of little things that we’ve not been able to do since Christmas,” Austin head coach Chris Tok said. “We really focused on it this week and the guys stuck together as group, they brought a fun attitude to the rink and they carried it for sixty minutes.”

The Bruins have already clinched their first ever trip to the NAHL playoffs, but they are currently fourth in the NAHL Central Standings, which means they would have to play without home ice for two straight playoff series to get to the Robinson Cup.

With 20 games left on the schedule, Austin is one point behind Aberdeen and nine points behind the Blizzard (27-12-3 overall), who they play just once more this season.

“Our guys need to believe that we’re capable of beating them and we did that tonight,” Tok said. “We scored a couple of goals tonight just getting the puck to the net and putting it in. You don’t always have to get the tic-tac-toe goals that are pretty with seven passes and our guys are starting to learn that.”

Austin native John Kirby scored his team-leading 15th goal of the season in the first period for the Bruins. 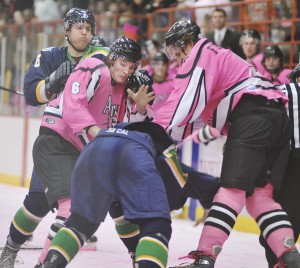 Bruins and Blizzard players get into it towards the end of the second period Saturday night at Riverside Arena.- Eric Johnson/photodesk@austindailyherald.com

Tyler Bruggeman had 23 saves for Austin.