Answers in the wind 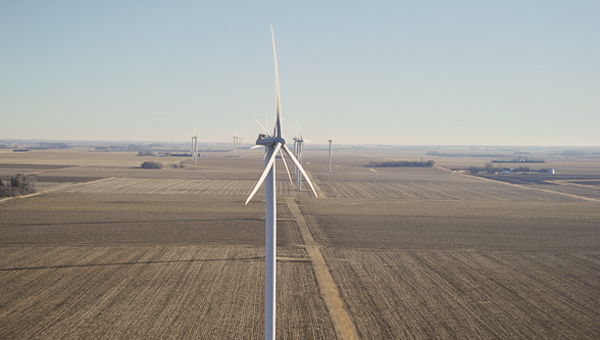 Many believe Congress will not renew a key wind energy tax credit, which could send the wind industry into a lull. However, some local officials believe there are still big things ahead for the industry. — Eric Johnson/photodesk@austindailyherald.com

The loss of a wind farm subsidy has some industry leaders squirming, but local officials see a bright future for renewable energies.

If Congress declines to renew the wind production tax credit — a key federal subsidy for wind energy — the industry could nose-dive in 2013. The credit is expected to expire in December, and there’s growing doubt in the industry that Congress will renew the tax credit.

He said he’d be surprised to see the credit end. While Congress has focused on cuts, Vietor said the wind tax credit received support from both sides of the aisle in Minnesota and Iowa.

“I truly don’t think it’s going to expire,” he said. “There is right now a lot of bi-partisan support.”

Vietor said that support has come thanks to one key reason: Wind farms have created jobs.

“It’s done a lot for us in Minnesota,” he said. “It’s really part of why we have seen the growth we have seen — a small part of it, but it is a part of it.”

In fact, Vietor was quick to caution this isn’t the first time the credit has neared an expiration date. It’s already been renewed multiple times, and even expired a few years ago before being passed again soon later.

The credit’s end could hit the brakes on projects scheduled for 2013. Beth Soholt, executive director of Wind on the Wires, a St. Paul renewable energy promotion group, said some manufacturers in the wind industry have already announced layoffs, anticipating a big decline in business next year.

The looming credit has already affected work in the industry, according to Vietor. Leading up to the expiration, he said there’s an influx in work to finish projects before the credit expires.

“The whole thing does create a big spike in development before it’s set to expire,” he added.

That seems to have been the case last year when Minnesota’s wind power production capacity grew by more than 500 megawatts.

A bill to extend the credit so far hasn’t gone anywhere in Congress. With lawmakers in a budget-cutting mood, renewable energy subsidies like the wind credit have been taking a beating. Several key ethanol and biodiesel subsidies expired at the end of last year.

In a regulatory filing with the Minnesota Public Utilities Commission the nation’s largest wind power provider, officials for Twin Cities-based Xcel Energy said it “appears unlikely” that Congress will extend the tax credit. Without the subsidy, the cost of wind energy will soar, Xcel regional vice president Laura McCarten said.

If the credit expires, many believe it will greatly curtail growth in the wind industry.

Vietor pointed to another energy trend that may secure wind’s future: The fluctuating cost of oil.

“That would really spur the next round of growth,” Vietor said.

Vietor said he expects more wind technologies and products to be manufactured to make turbines more efficient in upcoming years. He also said he expects solar to become more prevalent in the next five years.

Vietor predicted a big surge in solar, saying he expects about 20 percent of the homes in Austin to incorporate solar energy in five years.

But long before then, Vietor said he expects Congress to ultimately renew the wind subsidy.

“I really would be surprised if it wasn’t renewed,” Vietor said. “It’s meant too much growth, too much development.”

Drought may persist through spring