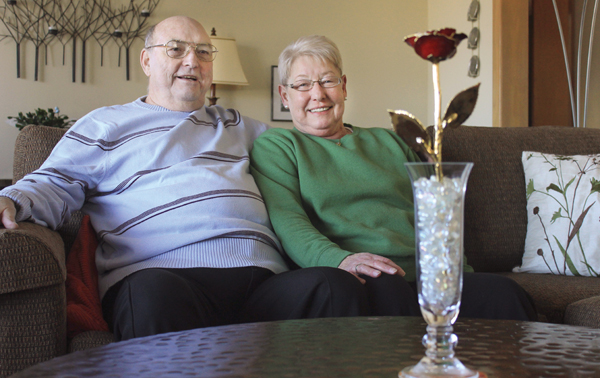 David and Helga Grant of Austin celebrated their 50th anniversary on Friday. David asked Helga to marry him a week after they met. - Matt Peterson/matt.peterson@austindailyherald.com

Love is in the air this time of year, and southern Minnesota is not immune to Cupid’s arrow: There’s plenty of adorable love stories in our corner of the state. If you’re looking for some inspiration this Valentine’s Day, read about these couples.

It took Helga Grant nearly 30 years to start taking her husband’s claim seriously. Now that she and her husband, David, have been married for 50 years, she believes him … mostly.

David made a bargain with the Lord. He said if God sent him a woman, he’d marry her and take care of her. He recalled making that bargain 50 years ago while serving in the Army in Germany.

“I just got tired of listening to all the noise in the barracks, and I said ‘That’s it — I’m going to ask God for help,” he said. “Look, you just send me a girl, and by golly, I’ll take care of her.”

The following weekend, David went to Augsburg, Germany, where he was going to pick up some pictures. Nobody was there with the pictures, so he decided to sit down for a beer. Across the room, three young ladies were eating, and David asked if any of them wanted to dance. They were hesitant, including Helga. However, Helga’s friends pushed her toward David.

It didn’t take long for David to ask Helga to marry him. In fact, it took just one week. He and God had a bargain, after all.

“So I made a date for the following weekend, and we got together,” David said. “I said, ‘OK, we’re getting married.’”

David pays no attention to what could have happened if Helga said “no.” To him, that wouldn’t have been possible, given the circumstances.

“She wouldn’t have said ‘no,’” he said. “I knew darn well we were going to be staying together.”

Helga didn’t think David was serious — for a long time. But he was, and he still is.

Helga is a German native. A year after they met, after toiling with marriage paperwork and other issues, the two married in Germany on Feb. 10, 1962. But Helga still didn’t take it quite that seriously. Helga thought if the situation went awry, she could opt out because they were married under Germany’s laws — not in the Catholic Church.

“I always thought, if it doesn’t work, I’ve never been married by the church,” Helga said.

But David made it official in May with the help of some others. The couple had a ceremony in a Catholic Church. There was no turning back.

Like any couple, they’ve had their squabbles. However, they’ve learned the ropes after 50 years of marriage. And their arrangement certainly isn’t something David is going to throw away.

“Yeah, God has been pretty good to us,” he said. 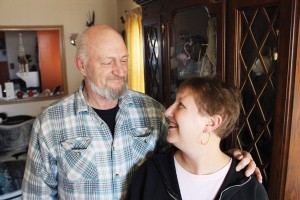 Rich and Jodi Bolinger look into each other's eyes Friday at their home on 11th Street in Albert Lea. - Tim Engstrom/Albert Lea Tribune

If you find meeting the love of your life to be difficult, try taking out an ad. That’s how Rich Bolinger found his wife, Jodi.

“We kind of joke about it,” Rich said.

The Albert Lea couple came together after Rich visited with a friend who worked at the Mower County Shopper a couple years back.

“I just said something about ‘Well, I’m a motorcycle rider. Goll, I need to find a woman that wants to ride on the back of the Harley and maybe do a couple rallies over the summer.’”

Little did he know, his wish would soon come true. A couple days later he got a phone call from a friend in Northwood, Iowa, who asked if an ad she saw in her copy of the Shopper was for Rich. Unbeknownst to him, Rich’s friend had put an ad in the paper.

“I musta got about three dozen phone calls,” Rich recalls.

Yet there was one voice that stood out. A mousy little voice who said she was from Austin and would love to talk.

“It intrigued me, so I called her back and we talked for an hour or two,” Rich said. “We had so much in common.”

Rich asked her out to lunch and the rest was history. They married in May 2010 after courting for a year.

“I just threw the rest of the telephone numbers away,” Rich said. “I though ‘Well, I met my match right here.’” 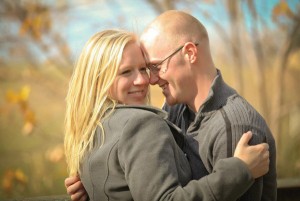 Krystle Kuchera, a massage therapist in Austin, and Kyle Davis, who serves in Albert Lea’s Delta Company of the Minnesota National Guard, plan to get married after Davis returns. - Photo provided

Not every love story starts at a massage appointment, but for Krystle Kuchera, a massage therapist in Austin, and Kyle Davis, who serves in Albert Lea’s Delta Company of the Minnesota National Guard and is currently stationed in Kuwait, that’s exactly the case.

The couple had met in passing but had never talked before taking a fateful motorcycle ride with friends in September 2010. After a little flirting, Davis asked Kuchera if he could come in for a massage appointment some time.

“Of course I said yes. So he came in for a massage and asked me as he was still lying face down on my massage table if I wanted to go to dinner,” Kuchera said. “He told me later that he asked me while he was face down because he was super nervous.”

After the appointment, they went for dinner at Taco John’s at Kuchera’s suggestion and then spent that night and many nights after sitting around and talking until 2:30 in the morning. A week went by like that before they officially declared that they were dating.

One short month later, Davis got the news that he would be deployed to Kuwait. He asked her if she wanted to end the relationship, but she quickly refused, so they stayed together, and when he deployed in May, Kuchera said she’d wait for him.

A short leave in July gave Kuchera the biggest surprise of her life — a proposal — though it didn’t exactly go as planned.

Davis had originally planned to set up one of his military buddies with a massage from Kuchera and suggested she’d put the ring she usually wears on his necklace. He’d then switch it out and surprise her with the new ring.

“He said I took the necklace away from him too fast,” Kuchera laughed.

Since that plan didn’t work, he ended up proposing at home. Davis slipped the ring on her finger. Kuchera asked, “what’s this?” and after asking whether it was an engagement ring or promise ring, Davis told her to choose.

“I told him ‘well you have to ask the question.’ So he did and I said ‘yes,’” Kuchera said. “It was pretty romantic because we’re both really jokey people.”

Davis will return from Kuwait in May. They talk every day on the telephone, once a week over Skype, and use Facebook to keep in touch even if it’s just an “I love you” or “I miss you” message.

Kuchera says her relationship with Davis has taught her great patience, communication and trust. It’s especially taught her that even the smallest details are important.

The Riverland women’s basketball team couldn’t hold on to a lead in a 71-66 loss to Rochester Community and Technical... read more