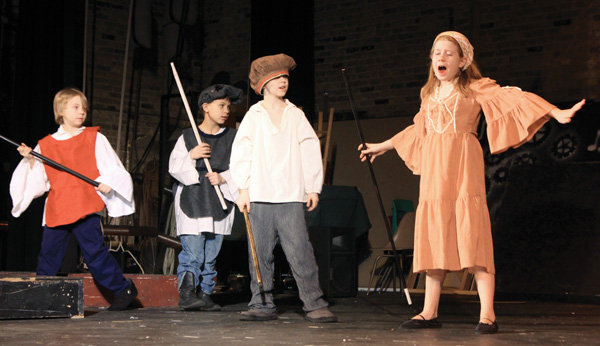 A group of kids perform as bullies to the main character for Matchbox Children's Theatre's upcoming production of "The Magic Flounder." Performers in the 37-character cast range from as young as 7 to older than 40. - Matt Peterson/matt.peterson@austindailyherald.com

Matchbox Children’s Theatre performers are no strangers to big-time scripts, but many of them are embarking upon a first-time adventure.

The big cast of local talent will perform the first-ever production of “The Magic Flounder,” a play written by Rochester resident Joan Sween that was inspired by “The Fisherman and His Wife” but has not yet been published in book form.

“I read the script, and I knew that was the one I wanted to direct this year,” said Angela Donovan, MCT board member and director of “The Magic Flounder.” 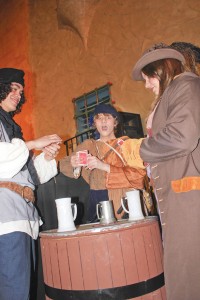 Actors rehearse a scene as card-playing town folk from "The Magic Flounder," which will open at the Paramount for Feb. 10, 11 and 12. - Matt Peterson/matt.peterson@austindailyherald.com

For a play’s book to become copyrighted and published, a cast must first perform it to the public. So after MCT performs the play next weekend, “The Magic Flounder” will officially find its way into the world of theater.

Sween, who has a Master’s degree in fine arts, is the founder of the Rochester Playwright Festival, Midwest Theatre Network and Minnesota Writers’ Alliance. Though she has written seven plays and seen four of them produced, “The Magic Flounder” is her first attempt at a play for youngsters.

The curtains will Friday, Feb. 10 at the Paramount Theatre on a centuries-old fishing wharf, where the main character, Eric (Peter Torkelson), never catches any fish. The townsfolk ridicule him for his misfortunes, but when he catches a magic flounder, Eric and his mother, Hedvig (Lia Culbert) are granted their wishes. However, Hedvig squanders their fortunes and abuses the privileges of the flounder’s magic. While cast members are excited about performing a classic tale about the dangers of greed and materialism, they are also excited about being the first group to perform a play that could go big time.

“There is a certain sort of magic about something that has never been done,” said Joshua Whalen, a 22-year-old Austin resident who has previously performed with Riverland’s Theatre Department.

Whalen is just one actor in the 37-member cast that ranges from age 7 to older than 40 — a large cast by Matchbox standards.

But Culbert, who plays Hedvig, may be more excited than anyone. She has multiple ties to the play.

“The fact that this is an original script written by someone I know just adds to the whole experience,” she said.

Culbert starred in her first MCT production in 1979. While looking around the room during rehearsal last week, she spotted at least 11 costumes she has worn in MCT productions throughout the years. Culbert is so involved in theater that she got married at the Paramount Theatre. Furthermore, Culbert is one of many for whom the play will be a close-knit event — on stage. Like others, Culbert is performing with her immediate family, including her son, Owen, daughter, Olivia and husband, Jason. The show is dedicated to Darren Lewis, as well, who died Sept. 24. Lewis’ wife and two of his kids are performing in the play.

The positive message portrayed by the play adds to its value, too.

“I really like the message of the play,” Culbert said. “It’s something that is going hand-in-hand with what we are teaching our kids right now.”

Despite some of the very young cast, Donovan said directing rehearsals since the beginning of January has been going well. The youngsters are focused, and costumes and props were arriving all last week.

Among what should a be a spectacular technical show with thunder and lightning, Donovan mentioned the set will be good. Students from Southland School in Adams created the rocks for the set, and the assistant director, Madlain Vander, has made some of the costumes, as well.

REDvolution kicking tour off in Rochester