1992 Shamrocks had a great run 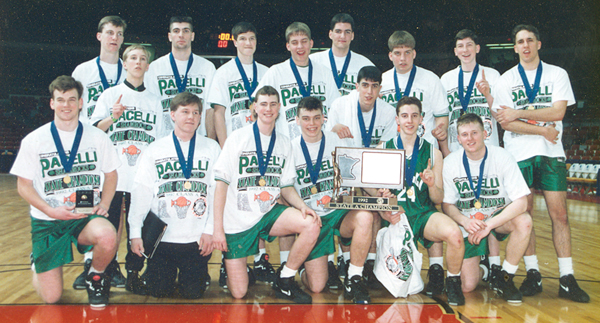 The 1992 Pacelli boys basketball team holds up its state champioship trophy after taking the Class ‘A’ title 20 years ago. The team is holding a reunion at Pacelli HIgh School this Friday at halftime of the Lyle-Pacelli boys game against Hope Lutheran. -- Photo provided

How do you go .500 in the regular season and win a state championship?

The answer lies with the 1992 state champion boys basketball team, but that answer may vary, depending on who you ask.

The 1992 Shamrocks, who will be honored at Pacelli Gym at halftime of the Lyle-Pacelli boys basketball game this Friday, entered the postseason with a record of 11-11, but they went on to win their next eight games, including a 68-62 victory over DeLaSalle in the Class ‘A’ title game.

Pacelli starting forward Steve Rogne, who now lives in Byron and works at Mayo Clinic with a wife and three children, recalled that the title came as a result of confidence from a group that had played together, and played well, since they were sixth graders. 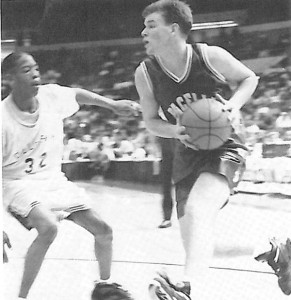 Pacelli’s Steve Rogne drives to the basket against DeLaSalle in the state title game. -- Photo provided

“We usually beat older teams when we were younger and figured we’d be pretty good at the high school level, but some kids grew and some kids didn’t,” Rogne said. “Everyone counted us out as losing the first game and going home, but I don’t think we had any intimidation. We just took it one game at a time and we knew if we played the way were capable of playing, we could play with anybody.”

Pacelli’s point guard Rob Garry, who teaches at Mahtomedi High School and has a wife and two children, said the season’s turning point came when the Shamrocks made a minor offensive adjustment after falling to 5-9 overall.

The Sunday after that loss, Pacelli decided to run a version of the up-tempo screening offense the team had run in middle school.

“(That loss) was clearly the low point of the season. I don’t think we felt continuity with how we played on offense,” Garry said. “(The change in offense) renewed some of our confidence and flow for the rest of the year. We ran it whenever teams played man-to-man against us and it hindsight, teams probably did that too often against us.”

Pacelli’s head coach Gary Erlandson saw two key points of the season. The first was a game against New-Richland-Hartland, where the Shamrocks trailed in the first half and ended up winning and the second was when they trailed No. 2 ranked and unbeaten Faribault Bethlehem Academy by 14 and came back to have a chance to win at the end.

“Something must have been said or done at halftime (of the NRH game), because the kids came out with a different energy and won. From that point on, they believed in themselves and played much better basketball,” Erlandson said. “When they had a shot to beat FBA, they realized they could play with the best.”

Pacelli went on to beat FBA in the section title game to get to the state tournament, which was played in the St. Paul Civic Center.

Garry remembers hearing a reporter ask Erlandson how Pacelli justified being at the state tournament when it didn’t even win it’s conference, to which Erlandson simply replied “we play in a great conference.”

“I overheard him and thought that was a great answer,” Garry said. “It seemed like such a surreal experience just getting to state and that was the pinnacle. We were happy just to be there, while teams like DeLaSalle were looking to win. Just getting on the bus was a big deal for us.”

While Pacelli’s 11 losses on its record didn’t strike fear in the heart of their opponents, that didn’t matter because they believed in themselves.

“We truly didn’t care who we played. No one was going to feel bad for us if we lost, Garry said.

Although he was happy just to play in the state tournament, Garry was elated to be part of a state championship team. He grew up with an athletic family that included six older brothers and one older sister. Two of his brothers played on the 1981 Pacelli football team that lost the state title game and another one of his brothers played on the 1985 Pacelli baseball team that made it to state.

“I was glad to win, but they were all even happier for me,” Garry said. “It’s incredible what sort of life impact an experience like that can have on a person. The confidence you get from it helps you in a lot of things later in life, from college to jobs.”

When Rogne looks back on the 1992 season, it makes him feel older. Especially when his nine-year old son sees pictures from state championship season.

“My son looks at my picture from back then and says, ‘wow your shorts are short and you actually had hair,’” Rogne said.

While a few players still live in the area, the 1992 Pacelli basketball is scattered across the country as players have moved on to Indiana, Michigan, Washington, Kansas and Iowa.

Rogne has been to Pacelli just once since he graduated and Garry, who went to St. John’s Univeristy with Rogne, hasn’t seen most of his former teammates in at least a decade.

The reunion is expected to draw at least 11 players back together and Erlandson couldn’t be happier to have his old team back in town.

“I’m like a proud papa whenever I get a chance to talk about them,” Erlandson said. “They’ve all done exceedingly well for themselves in their careers after high school. They were a great group of kids back then and they still are today.”

The LP boys will play Hope Lutheran Friday after the girls game, which starts at 6 p.m.

Lyle-Pacelli's Sarah Holtz saves a ball from out of bounds during the Athletics' 58-36 loss in Medford Monday night. --... read more