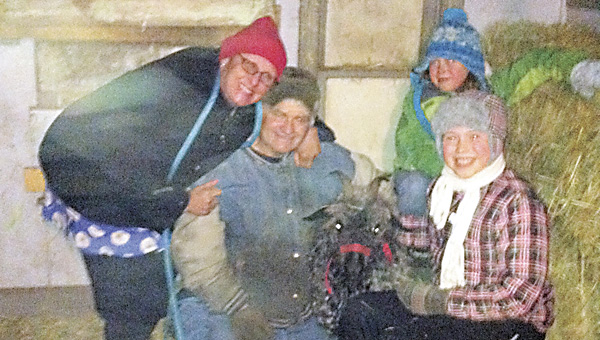 Photo provided: Karen and Jim Aakre (left) were happy to be reunited with their goat, Curley, Wednesday afternoon. Happy to meet the goat were Koryna, 9, and Kyra, 12, Tony and Andrea Loomer’s children. Curley walked onto the Loomers' farm Wednesday and was found by Tony. Other than being cold and hungry, the goat appears to be in good health.

The wayward Angora goat that was on the loose for 25 days in Fergus Falls, Minn., wandered onto the Tony Loomer farm Wednesday, where Loomer found it among his own goat herd when he went to feed the animals at about 4 p.m.

He was cautious, he said, waiting for the goat to realize he was a friend before putting some food down, grabbing her horns and leading her to a warm barn where she promptly laid down, perhaps relieved her wandering days were over.

“It was pretty cold out,” Loomer said. “She knew we had a nice warm place, I think. I don’t think she was going to go anywhere.”

The goat, Curley, made headlines when it fled a Christmas nativity scene in Fergus Falls the weekend of Christmas. Curley was supposed to have a role in a nativity scene at Bethlehem Church. Instead it escaped and has been on the lam ever since. Countless Fergus Falls residents spotted Curley around town the past few weeks, and some chased it, but no one was able to capture it.

Loomer’s wife, Andrea, called the goat’s owner, Karen Aakre, who called her husband, Jim, with the good news Wednesday. They drove together to the Loomer farm to collect Curley.

“They were sure happy to see each other, both the goat and the owners,” Loomer said. “I’m not sure who was happier, the goat or them. Karen was almost crying.”

Curley appeared to be very hungry, shaking from the cold and appeared to be wet on her bottom, rear and on her back, according to Jim Aakre, who along with his wife, Karen, have been worried about the goat’s fate since it slipped its leash Dec. 24, 2011.

“Curley was very happy to see me,” Jim said. “She calmly laid on a straw bale beside me. She seemed to sense that finally everything was going to be OK.”

With temperatures dropping to 11 below zero, and a wind chill pushing the temperature even lower, it was too cold to put Curley in the back of a truck, so the goat was loaded into the backseat of the Aakre’s car, where Jim sat with the goat while Karen drove them home.

“My husband (was) like a little kid,” said Karen. “He held Curley the whole way home and said ‘See Curley? You were looking for my voice.’”

Because of frost and ice on Curley’s body, the Aakres think she may have fallen in the river, but other than being cold, and definitely having lost weight from her time on the lam, Curley appeared to be in fine health, Aakre said. He plans to keep her in a heated shop for a couple of days to make sure she doesn’t get pneumonia. He also gave her an overdue dose of worming medication.

“I am not sure Curley would have made it much longer, though, because of the extreme cold,” Aakre said.

Loomer, too, is glad the story has a happy ending.

“It’s (was) an awfully cold night to be out,” he said. “And we live along the Otter Tail River and there are lots of coyotes here. It was a good night for her to go home.”

Since the goat has such a following now, Karen Aakre said Curley will likely make future appearances in nativity scenes, though they will take extra precautions.

“I said ‘you know Curley, next time you go, we’ll put two leads on you,’” Karen said, adding Curley might show up at a community event — perhaps even a sporting event — soon as a surprise so people can meet the captivating goat.

As the finders of the goat, the Loomers may collect a $250 reward, enjoy a night at Best Western along with a meal, and earn the $20 cash for providing the first publishable photo of Curley. But Tony didn’t seem concerned about all that.

The Aakres thank Lakes Radio, The Fergus Falls Journal, the police and sheriff’s department and everyone who helped Curley find her way home.

“Our prayers have been answered that it turned out the way it did,” Aakre said.

An Austin man was criminally charged Wednesday with four counts of cocaine sales and one count of drug possession. Anthony... read more