Vanishing Point tangles you in complexity

This week Jason reviews “Tangled in a Dream,” by Vanishing Point.

Vanishing Point’s second album is tangled, but in a good way.

“Tangled in a Dream” twists a variety of emotions and styles into an album that’s deceptively hard to grasp.

It took a few listens to get a grasp on the sound that shifts around, but is still at its core a progressive metal album. 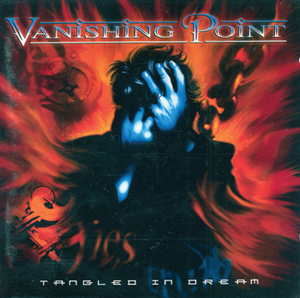 Vanishing Point's "Tangled in a Dream"

Vanishing Point interlaces progressive metal with tastes of 1980s, 1990s and 2000s. The group relies heavily on keyboards for symphonic overtones. But make no mistake, the band’s able to maintain a biting sound.

Still, the group sends a few curveballs throughout the album: a saxophone that sounds stolen from a 1980s romance film and a hidden track covering Pink Floyd’s “On the Turning Away.”

Much of the album incorporates influence from late 1970s and 1980s metal bands with melodic vocals. The guitars often employ the tight tones of arena rock.

“Tangled in a Dream” opens as an album churning and building forward, but rather than exploding in head banging metal, the sound sways from grand choruses to quiet introductions.

The variations in sound, tone and volume make for a diverse sound that can act as a good introductory album to the progressive metal genre.

“Tangled in a Dream,” the title track and a bit of black sheep on the album. When chimes open the track, I half-expected a female singer like Amy Grant to start singing. Still, the track works as a pleasant, dreamy closer for the album with the repeated chorus of “Wake Me From these Dreams.”

After an extended silence, the hidden track, “On the Turning Away,” starts. The poppy cover is the perfect encore for the album.

50-50. The entire album isn’t going straight onto my iPod, but I’m certainly going to reserve space for some of the tracks.

Paramount gearing up for the new year

Preparing for a New Year right now might seem late, but it is the perfect time for the Austin Area... read more