Up ‘til 2 will set Austin jiving 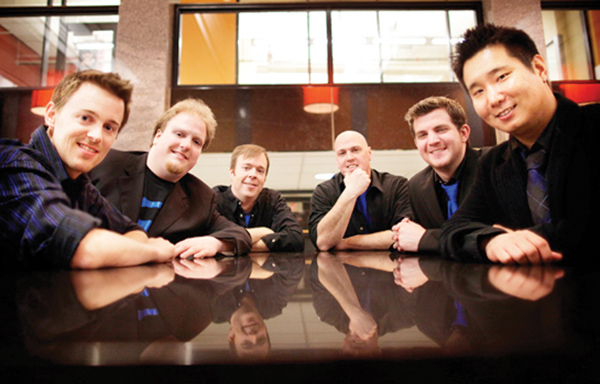 When hearing Up ‘til 2 vocal band, some questions may come to mind, like: Why are they called Up ‘til 2? What the heck is a vocal band? Why does the group look different than the last time I saw them in Austin?

I will answer all the burning questions about this unique musical group, hopefully enticing you to check them out at the historic Paramount Theatre this coming Saturday, Jan. 28.

Answering the first requires a bit of history. When the group formed six years ago, most of the members led busy lives. The only time they found to rehearse was 10 p.m. to 2 a.m., hence the name Up ‘til 2.

Their music is as unexpected as their name, taking a cappella music to the next level. This is also where the vocal band part comes in.

Blending their voices with vocal percussion, they transform into a rock band with a full sound and driving beat. Listening to their music, any number of instruments can be heard.

The resulting sound is something rarely experienced. It has transformed slightly over the years with the changing band members.

The three founding members: Donovan Germain, Ben Foster, and Barry Patrick have remained the same, but the rest rotated over the years.

In fact, there have been 10 other members, including the three other current members.

Those of us who have experienced the different versions of the group would agree that the current one is probably their best sound yet.

Besides bringing new faces, the group will share numerous new songs with their Austin fans, including Firehouse’s “Don’t Treat Me Bad,” Rascal Flatt’s “Love You Out Loud,” and Journey’s “Separate Ways.”

They can be ordered by calling 434-0934 or online at paramounttheatre.org.

We’ve all heard the funny songs, but beans are no laughing matter. Beans provide protection against and reduce the risks... read more