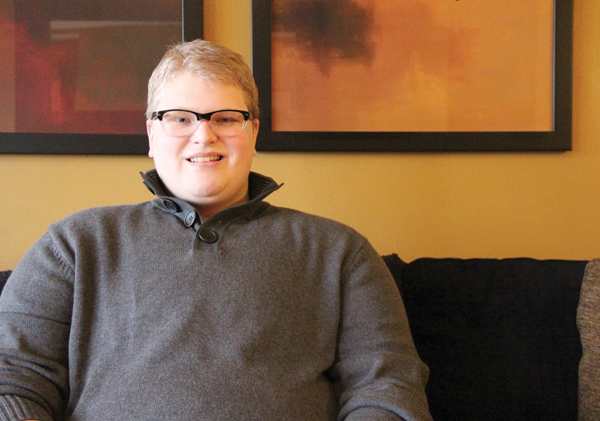 Maxx Flaa, a 2010 graduate of Albert Lea High School, knows this first hand. Maxx is transgender, meaning he was born biologically female but identifies himself as a male. He legally changed his name from Maddie to Maxxwell last August, but didn’t come out as transgender until after high school.

“Since I could walk and talk I asserted myself as male,” Maxx said.

His mom, Kim, said he would look at photos and ask why they had put him in dresses, but she just assumed he was a tomboy. Because he chose to dress and wear his hair more masculine, grade school was hard.

It didn’t get easier. During middle school and high school, Maxx said he was deeply depressed. He hurt himself and went to therapy, but nothing seemed to help.

“I knew something was wrong because I had a deep hatred for my body,” Maxx said.

He’d been in therapy since age 4 for depression, but in the last year has started therapy at a clinic at the University of Minnesota that specializes in helping those who identify as transgender.

Maxx said his parents have been supportive, and some people like Maxx can’t say the same. Kim said they always knew, but they didn’t know there was a name for how Maxx identifies himself.

“I can’t imagine ever giving up on your child,” Kim said.

Maxx said he had a few friends during his school years, but they weren’t in his grade so he felt alone a lot. Now that he’s in college and has come out as transgender, he feels much more happy and at ease. He enjoys going by the name Maxx as well. He used to be called “Mads,” which was short for Maddie. He thought Maxx was close to Mads, and wanted to use two of the letter x to represent the two chromosomes, XX, that biological females have.

He said there weren’t any resources for him during high school and middle school, and wishes there had been a support group or a counselor with knowledge about LGBT issues who could have helped. Even when he went to Riverland Community College there was only a gay/straight alliance group, which in its name is not inclusive of transgender people.

“I want people to know there is help out there,” Maxx said. “It gets better — it really does.”

He hopes to help others who have gone through what he has, and has already started doing that. At Minnesota State University, Mankato, Maxx has made friends through the LGBT, or lesbian, gay, bisexual and transgender, center on campus.

“My new friends know me for who I am,” Maxx said.

He’s started campaigning for gender-neutral bathrooms on campus and said he plans to always be involved in some sort of activism. He’s majoring in gender and women’s studies and hopes to someday become a professor in LGBT studies.

“That field is still growing and developing,” Maxx said.

For now, Maxx understands that some people aren’t accepting, and he wishes that would change.

“I wish adults could be accepting of everyone like kids are,” Maxx said.

Vanishing Point tangles you in complexity