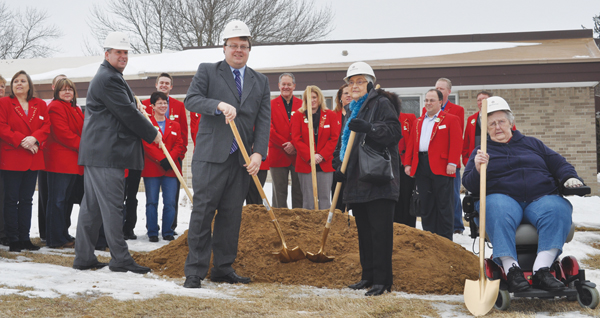 St. Mark’s held a groundbreaking ceremony Friday, kicking off a $13.4 million remodel and expansion project. The construction, which is scheduled to begin next week, should last 13 to 14 months with completion in the spring of 2013.

St. Mark’s board president Marty Helle said the first step is to prepare the west wing — which has been empty for several months — for demolition, which will be replaced with new structure.

No residents will need to move away during construction, but some will be relocated during the construction process, according to Helle. Most of that work will happen at the end of the project, he said.

“There will be very little disruption to the normal life of our residents,” Helle said. “We’re hoping it will be exciting for our residents to see the project come together.”

St. Mark’s has been planning the expansion for years, but its board of directors just announced on Jan. 12 that it had closed on financing for the expansion, which will be financed through long-term tax-exempt bonds.

The redevelopment will include:

•Creating a new occupational and physical therapy area, a multi-purpose gathering room, chapel and living area, all near the new front entrance to the campus on 4th Street;

•Relocating and enhancing the beauty shop and café area.

Telling a child you love them

QUESTION: How do children really know that they are loved in their families? ANSWER: Fortunately there are many, many ways... read more