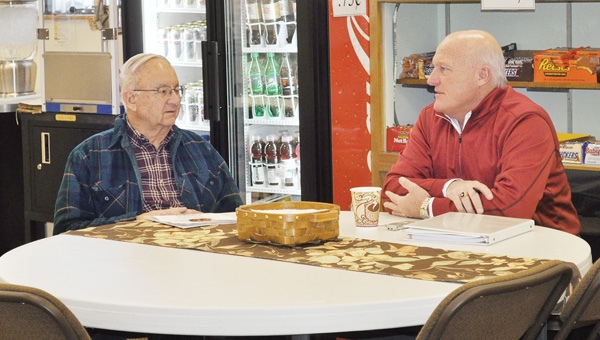 State Sen. Mike Parry, R-Waseca, (right) talks with a man at the Mower County Senior Center Wednesday on a visit to Austin. He is one of the Republicans challenging Rep. Tim Walz in Minnesota’s 1st District. -- Amanda Lillie/amanda.lillie@austindailyherald.com

The stop was one of many meet-and-greets Parry will hold this month as he campaigns for Democrat Rep. Tim Walz’s congressional seat.

Parry said he has been meeting many new faces on the campaign trail and has been well received.

“I’m getting a good response,” he said. “They see my track record in what I’ve done in a short two sessions (in the Minnesota Senate).”

Parry said his main concerns on the campaign trail continue to be jobs and the economy, which is something he is looking forward to working on in the Senate this legislative session, as well.

“We’ve got all the elements for a great session,” he said.

Update: No change after recount