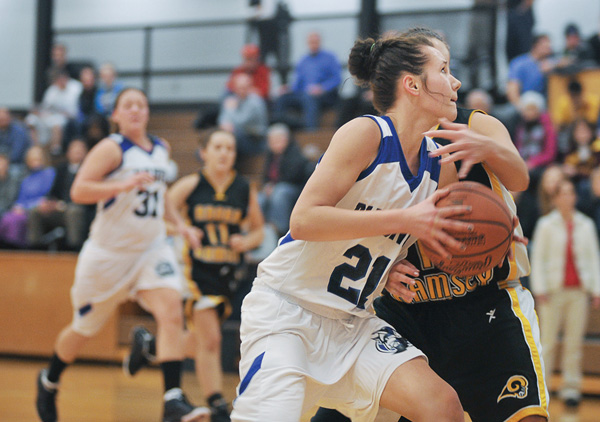 Riverland's Sophia Hebrink looks inside during the second half against No. 1-ranked Anoka Ramsey Wednesday night at Riverland. - Eric Johnson/photodesk@austindailyherald.com

So close, yet so far away.

The Riverland women’s basketball team nearly knocked of the No. 1 ranked team in the NJCAA but a couple of tough breaks cost them in a 56-54 loss to Anoka-Ramsey (12-2 overall, 1-0 MCAC South) in Riverland Gym Wednesday. 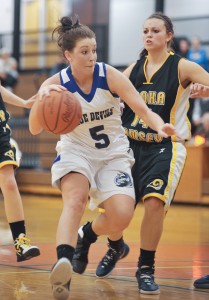 Riverland's Cassie Masberg pushes inside during the second half against No. 1-ranked Anoka Ramsey Wednesday night at Riverland. - Eric Johnson/photodesk@austindailyherald.com

RCC led for most of the night until the Rams finally tied things up at 54 when Tamarra Shorter, who scored 19 points, banked in a three-pointer from the wing with 1:09 left in the game.

RCC suffered a turnover on its next possession and A-R’s Erica Parker drew a foul for the Rams under the hoop with just two seconds on the shot clock. She hit both free throws to put A-R up 56-54 and RCC’s Robin Arjes missed a game-tying 15-footer as time expired.

“This is the team I’ve been waiting to see since the break,” RCC head coach Suzy Hebrink said of her squad. “We led the number one team for thirty nine minutes and that’s gotta send a message.”

The Rams got back in the game by forcing turnovers and getting loose on fast breaks.

“You’ve got to attack the basket and handle the ball and we don’t have a true point guard,” Hebrink said. “The more we dribbled, the more trouble we got into.”

Austin grad Rebekah Aase dominated inside for the Blue Devils as she finished with 21 points, 18 rebounds and four assists. She also played a big role in keeping the Rams’ offense in check.

“I thought our defense was really good. We’ve worked on it a lot and it showed,” Aase said. “We’re encouraged by how we played. They’re a really good team and to even have a chance to win is sweet. We came out with confidence and played our game the whole time.”