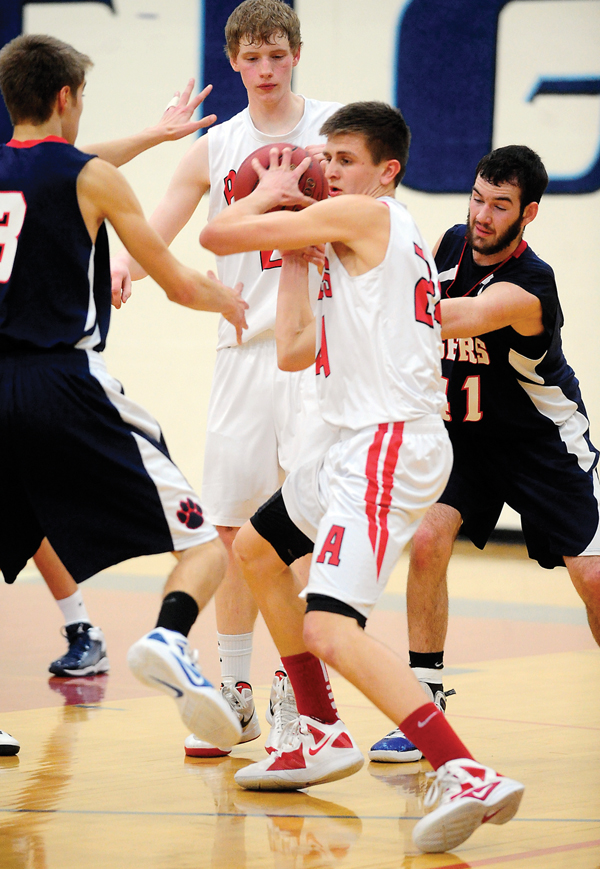 Austin's Tom Aase looks to pass the ball out of a double team on Tuesday during the second half in Albert Lea. Austin used a 25-0 run to beat Albert Lea 79-40. - Andrew Dyrdal/Austin Daily Herald

ALBERT LEA — The Packers drilled 12 three-pointers and forced 21 turnovers as they cruised past Albert Lea (4-12 overall, 3-7 Big Nine) 79-39 in a boys basketball game on the road Tuesday.

The Tigers scored the first two points of the game, but Austin (12-4 overall, 9-2 Big Nine) responded with a 25-0 run that put the game away early on.

“We forced a lot of turnovers with our press and Joe Aase came out on fire,” Austin head coach Kris Fadness said.

Aase hit five threes in the first half as he finished with 25 points and Zach Wessels added 16 points for Austin.

[imagebrowser id=2362] As the Austin and Albert Lea boys’ basketball teams prepare to square off Tuesday, the Herald looks back... read more