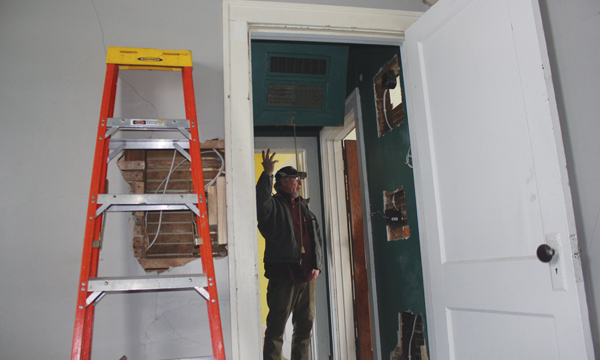 The HRA and Riverland’s Carpentry and Electrician Programs have partnered to renovate a one-level home at 1003 Eighth Ave. NW, which until last summer had been Mower County property.

“It’s not the largest house in the world, but it’s a very nice house,” said Karen Mattson, Family Housing Manager. 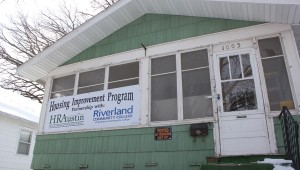 Riverland Community College carpentry students are remodeling this home at 1008 Eighth Ave. NW in Austin. The Housing and Redevelopment Authority purchased the home from the county and will resell it when the remodel is complete. — Matt Peterson/matt.peterson@austindailyherald.com

Mattson fell in love with the circa-1915 Arts and Crafts home after looking at vacant lots last spring. Leaning Tree LLC bought two HRA homes east of The Hormel Institute last year when the company began purchasing land for a proposed Institute expansion and Mattson was looking for available lots to replace the lost houses. After obtaining a list of county property, she found the house and immediately fell in love with it.

Mattson convinced part-time Executive Director Jim Hurm and Riverland instructors to invest in the house. The last hurdle before construction began was buying the home from the Mower County Board of Commissioners, which the HRA did for a little more than $1,500 last summer.

Riverland students have worked on the home since December, which means they’ve created new floor plans, tore out existing plumbing and some walls, and rewired everything. In fact, there’s little that isn’t being reworked or replaced in the home.

“This is a project that we cannot duplicate in our shop,” said Dan Rayman, Riverland Electrical instructor.

Many starting electricians will work on renovations similar to this home during their first few years, according to Rayman. Riverland students have already had plenty of practice climbing into the attic and down through wood and plaster walls rewiring the home, even redoing the wiring along the ceiling at one point.

“I like it,” said Cory Monson, second-year Riverland student. “I was a carpenter before so I’ve done a lot of this kind of work.” 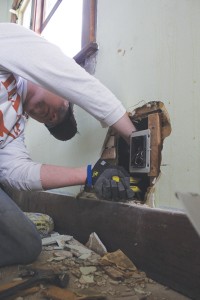 Cory Monson, a Riverland student, tacks wire to an outlet at a house at 1003 Eighth Ave. NW Monday morning.

Once the home is finished, it will be a two-bedroom, one-bathroom home perfect for a young family, according to Mattson. There will be a wide-open space perfect for a living room and dining room along with a kitchen on the main floor, with a small storage space in the attic. The basement will have enough space for a family room, though Riverland students will leave much of the basement work up to the next homeowner. Aside from putting in plumbing for a bathroom and an egress window in case the owners want to add another bedroom, the home’s basement will go unfinished.

Once construction is done, the home will be ready for market. The HRA and Riverland will put on an open house and list it for sale, presumably to a moderate income family, according to Mattson. In addition to massive renovations, the house has a spacious backyard and is located close to Sumner Elementary School, a plus for prospective homeowners.

“This is such a gosh-darn nice neighborhood,” Mattson said.

Minnesotans will vote on at least one constitutional amendment this fall and reports from St. Paul indicate that lawmakers are... read more