Hospital expansion ahead of schedule 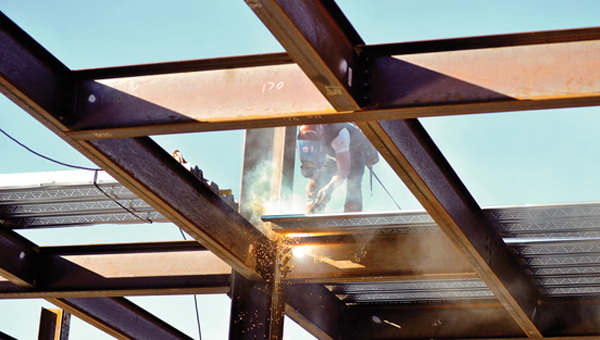 While snowmobilers may not appreciate the lack of snow, it’s been a blessing for the medical center’s $28-million expansion project, which is now ahead of schedule because of it. 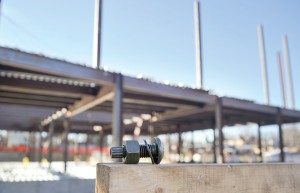 A bolt used to fasten steel used in the addition sits waiting to be installed, backed by the ongoing construction Tuesday afternoon.

“Normally with winter weather, we can lose one to two weeks due to the cold and snow, but that shouldn’t be the case this year,” Nordeng wrote in an email.

The medical center’s expansion project is progressing, and those passing through downtown Austin in the past few weeks probably have noticed a 200-foot crane being used to install the framework.

The 100-ton crane is being used to construct the structural steel for the expansion, according to Nordeng. Nordeng said the steel work has been completed on the lower, first and second levels, and the metal decking is being installed. Once that’s completed, they will pour concrete on each of the floors. 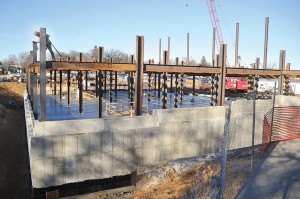 Construction continues on the first floor of the addition. Construction is projected for completion in February of 2013.

Nordeng said as they continue the installation of the exterior structural walls and flooring, the next steps include underground plumbing and electrical work, bricking the support framing, and enclosing the addition. Then, he said, the interior work can begin.

The construction has caused patients to alter their schedules, as a temporary, east-side entrance and parking change have been in place since September.

Patients will use the east-side entrance until the project is completed.

“We know that the temporary entrance is not the perfect location and that it is taking longer for patients to get to their scheduled visits, and we’d like to remind patients and visitors to remember to allow for a little extra time,” Nordeng wrote.

Overall, Nordeng said they are hearing a lot of positive comments about the expansion.

Officials said the project will help the hospital more effectively take care of patients as a team. Physicians and departments that may see the same patients will be located next to one another.

The lower level of the building will include a musculoskeletal center with services relating to orthopedics, sports medicine, a pain clinic, podiatry and rehabilitation.

The specialty clinic will be redone and moved near general surgery. Family medicine will expand on the second floor and an expanded cardiology department will move there, as well.

The OB/GYN department will move to the third floor, along with pediatrics and finance and administration.

The first floor will add the Austin Eye Clinic — which will move from 510 Second St. NW — as well as a new Mayo Clinic retail and pharmacy outlet. The cafeteria will also be expanded, something that hasn’t happened since 1938.

The entrance area will also include a main desk in the middle of the front hall for volunteers to greet patients, staff and visitors.

The houses directly north of the medical center — used to house their communications department and other services — will be demolished and used for green space, and those services will be moved to the medical center, Nordeng said.

A 23-year-old Austin man led police on a zig-zag chase through backyards Tuesday after allegedly stealing a $12 bottle of... read more