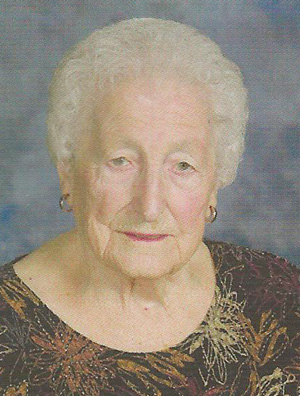 In addition to being a homemaker, she also assisted her husband, Bill, at Mike and Bill’s bar/restaurant in Adams. Marie was a member of Sacred Heart Catholic Church, Sacred Heart Council of Catholic Women, where she was vice president of the Rosary Council (SHCCW), Adams American Legion Auxiliary; she served as the treasurer of the ladies golf league at the Cedar River Golf Club. For 58 years, she was a member of the Jolly Dozen 500 club, which she helped form in 1952.

Marie especially enjoyed spending time with her children and grandchildren. She liked traveling, golfing, fishing, sewing, quilting and crocheting. Her specialty was making afghans. She made more than 50 of them with each of her grandchildren receiving one. Her favorite hobby was playing cards.

She was preceded in death by her parents; husband, William, son-in-law, three grandchildren, three brothers and three sisters.

Funeral services will be 11 a.m. at Sacred Heart Catholic Church on Monday, Jan. 23, with Father Thomas Loomis officiating. Interment will be in Sacred Heart Cemetery. There will be a Rosary at 4 p.m. Sunday at Adams Funeral Home where friends may call from 4 to 7 p.m. There will also be a visitation at the church for one hour before the service on Monday.

In lieu of flowers, memorials are preferred to Sacred Heart Catholic Church or Sacred Heart School in Adams, The Eagles Cancer Telethon or The Multiple Sclerosis Association of America.