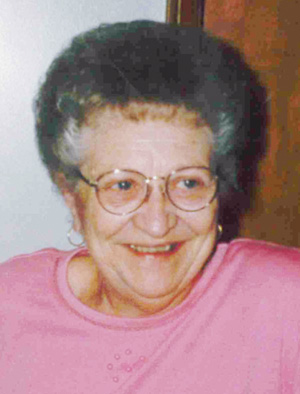 Marcine B. Schultz, 81, of Adams, formerly of Austin, died Monday, Jan. 16, 2012, at Adams Health Care Center. Marcine Wollenberg was born in Waltham Township on May 22, 1930, to Edward and Edna (Fett) Wollenberg. She grew up in Austin and graduated from Austin High School in 1948. On Nov. 24, 1950, Marcine married Arlin W. Schultz at Grace Lutheran Church in Austin. The couple had four children. She was a member of St. Olaf Lutheran Church. Marcine liked knitting, reading, canning produce from the garden, and family vacations at Diamond Lake. Marcine was an early advocate for special needs children and felt strongly that they should have the same opportunities as other children.

Survivors include her son, Verdell “Buck” Schultz of LeRoy; three daughters, Lori (Thomas) Hintz and Barbara Schultz, both of Rochester, and Karie Schultz of Austin; two grandchildren, Ben and Megan Hintz; brother, Warren Wollenberg of Edina. She was preceded in death by her parents, Edward and Edna Wollenberg, husband, Arlin in 2008, and her brother, Norman Wollenberg in 1994.

Funeral services will be 1:30 p.m. Thursday, Jan. 19, 2012, at St. Olaf Lutheran Church in Austin, with Pastor Ron Barnett officiating. Visitation will be one hour prior to the service at the church. Interment will be in Grandview Cemetery. Worlein Funeral Home of Austin is in charge of arrangements. Condolences may be expressed to the family online at www.worlein.com.