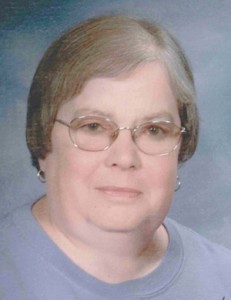 Judith was raised in Albert Lea and Adams, and then moved to Austin where she graduated from high school in 1962. She took a job with Moore Business Forms in St. Paul.

On March 18, 1967, she married Miles “Mike” Irwin at St. Olaf Lutheran Church in Austin. The couple was blessed with one daughter.

After moving to Winona, she worked at Springdale Dairy as a bookkeeper. In 1971, she moved back to Austin to raise her daughter and be with her family. She was a member of Our Savior’s Lutheran Church, Al-Anon, and she enjoyed sewing. Judith was totally devoted to her family, especially her grandchildren.

She was preceded in death by her father, Guy Roberts; her grandparents; one brother, Bruce Hatleli.

Memorial services will be 10:30 a.m. Wednesday, Jan. 25, 2012, at Our Savior’s Lutheran Church in Austin, with Rev. Karen Behling officiating. Visitation will be from 4 to 7 p.m. Tuesday, Jan. 24, at Worlein Funeral Home in Austin, and one hour prior to the service at the church on Wednesday. Interment will be in Grandview Cemetery.

Avery Schaefer Avery John Schaefer was called home to the Lord on Wednesday, Jan. 18, 2012, at the Adams Health... read more