From the Institute to flood dollars 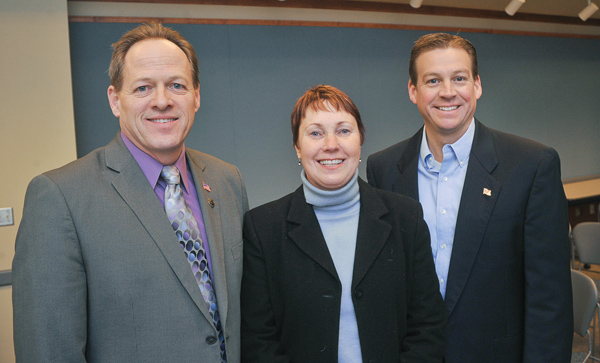 State legislators are looking to settle some far-reaching issues this year, from getting people back to work and financing schools to controlling state flood plains and finding the Minnesota Vikings a new stadium. There’s plenty to watch out for this legislative session, which starts Tuesday, and plenty of issues that could impact Mower County for years to come.

‘Win-win of the century’

It’s hard to find anyone opposed to The Hormel Institute’s $27-million potential expansion, which would bring 125 high-paying jobs to Austin. But opposition or not, it still has one giant hurdle to clear; approval of $13.5 million in funding from the state capital bonding bill.

Sen. Majority Leader David Senjem, R-Rochester, praised the plan, calling it an “absolutely outstanding project” when he toured The Institute in December of 2011 as the Capital Investment Committee chair. House Capital Investment Committee chair, Rep. Larry Howes, R-Walker, toured The Institute in October of 2011 and said the project fits into one of the main areas they like to fund. Gov. Mark Dayton included the project in his bonding wish-list last Tuesday and it was one of three state projects he highlighted as examples that could provide substantial economic growth.

The Hormel Institute, founded in 1942, tripled its size with an expansion in 2008 and since has gone from 60 employees to 130. Now, it’s at full capacity and ready to expand again.

The expansion would take place on The Institute’s existing land, with 23 properties purchased to the east used for parking.

Local legislators are also on board, as Rep. Jeanne Poppe, DFL-Austin, Sen. Dan Sparks, DFL-Austin, and Rep. Rich Murray, R-Albert Lea, have all pledged their support.

“I think it’s the win-win of the century,” Poppe said. “I would give it a strong endorsement and hope it’s included. It really captures everything. With bonding projects, you’re looking for something with regional and statewide significance, and this is both.”

Plus, Poppe said, cancer research is something from which everyone benefits.

“That’s not just an Austin thing,” she said. “That’s worldwide. But as a region, we can appreciate the strong efforts that (The Institute) has made to try to prevent cancer.”

With a projected $1 billion surplus in the state’s budget, the Legislature may have the opportunity to pay off state aid shifts to schools this year.

School districts across Minnesota are facing cash flow issues stemming from the Legislature’s 2011 decision to shift about $700 million more in state school aid as part of the state’s budget battle solution. About $2 billion in total has been shifted away from Minnesota schools over the past several years.

“All the money has to go back to pay the shift,” Murray said. “Until then, we should not be trying to spend any of this surplus money. It needs to go to paying the shift back and filling up our reserve funds.”

The 2010 budget shift called for making 70 percent of the first budget year’s payment out to schools and then paying off the remainder over the next two years. Under the current shift, schools get 60 percent of their aid during the first year with the rest paid off in subsequent years. School districts will still get the same revenue, but a district’s cash flow will be negatively impacted.

Austin Public Schools is considering a $7 million loan in the form of eight accreditation certificates to cover cash flow issues stemming from the state aid shift. If a district doesn’t have enough cash on hand to pay bills every month, the situation could affect its credit rating. Austin recently went through a rating review through Moody’s financial firm in advance of the $28.9 million new school project set to begin this spring. Though the district’s underlying credit rating remains high, the cash flow problems are seen as a negative.

“That’s seen as a negative because the state isn’t paying us our money,” said Mark Stotts, Austin’s Finance and Operations Director.

Though districts hope the state will address the increased state aid shifts, Austin officials haven’t heard any news regarding state aid shift repayment from the Capitol, or at least no more than usual.

Yet with so much attention to the latest state aid shift, legislators may take a harder look at the issue.

“We have an almost $1 billion surplus now, so I think that’s one of our top priorities to start,” said Rep. Pat Garofalo, R-Farmington, and chairman of the Education Finance committee.

Local educators are watching the Legislature’s upcoming discussions on integration funding with a lot of interest: The integration revenue program ends June 30, 2013, and the Legislature included redefining the program in its education budget last year.

“Those dollars are going to be repurposed,” Garofalo said. “They’re not going away.”

The idea is to do away with the current program, which allots money to districts based on its student population, and to use that money on measurable goals to promote integration, increase diversity and get rid of the widening achievement gap between white and non-white Minnesota students. Legislators created the Integration Revenue Replacement Task Force under the Minnesota Department of Education to review integration funding and propose a new program.

“What they’re doing is they’re calling it something different and the rules are going to change,” Stotts said. “What’s going to happen is more districts are going to be eligible for this funding.”

Task force members have looked at ways to improve student achievement and forced busing, according to Garofalo. While Garofalo said greater Minnesota could have increased funding under the new program, educators won’t hold their breath until Legislators decide what to do with the current program.

“I have no predictions,” said Kristi Beckman, Austin’s Integration Coordinator.

Beckman said district officials have planned for $640,000 in annual integration funding for the past couple years in case legislators do away with the revenue stream.

“We just don’t know what they’re going to do,” Beckman said. “We’re going to stick with the initiatives we have going on right now.”

Though some legislators say integration funding has not led to useful integration changes, Austin schools used integration funding to create the Success Coach program, where success coaches work with students of color, English Language Learning students, and their families to help them succeed in the classroom. A mixture of counselor, paraprofessional and instructor, success coaches are widely seen as an improvement to Austin schools in recent years.

“We are using our resources in a more innovative way,” Beckman said.

The Integration Revenue Replacement Task Force is expected to issue recommendations in a report by Feb. 15. Legislators will determine how best to use integration funding for Minnesota schools later this session.

“Even in small, rural school districts, there’s greater diversity amongst students,” Poppe said. “In one large state, we need to try to balance all of that. All of the voices need to be heard.”

Austin may once again be primed to receive more money for flood mitigation efforts in 2012.

Gov. Mark Dayton’s budget proposal includes $20 million from the Department of Natural Resources to be given to communities, as long as they are matched 1 to 1 with local dollars.

While that amount is a little less than last year’s flood mitigation funds, Sparks said, “It is a good starting point.”

He is confident Austin will receive more funding in 2012, as the city has proven it is dedicated to stopping floods.

“We’ve proven from our past track record that we are spending those dollars wisely,” Sparks said.

Sparks referred to the local option sales tax, which in less than a decade has secured millions for flood mitigation throughout Austin. Because of that significant amount of money, the DNR has been willing to match those funds.

City Engineer Jon Erichson, among many others, hopes to see the DNR match $3 million with the city of Austin for a new project on Turtle Creek, which includes property acquisition, flood mitigation structures and improvements to a sewer line that is prone to backing up.

Sparks has seen the community go through many floods in his life and thinks Austin may be nearing the end of its flooding issues within the next few years. Both he and Poppe are confident that Austin will once again receive money for flood mitigation.

Poppe said that’s because the DNR may be unlikely to stop funding a project it has assisted for years. She said DNR officials like to see a project completed before they start dispersing dollars elsewhere. Furthermore, she said, officials recognize Austin as a problem area. And Sparks hopes to see construction begin soon.

“Hopefully, if we secure some more bonding dollars this year, we will see some more progress next summer during the construction season,” he said.

But flooding doesn’t start in Austin. It’s starts upstream, which is why Poppe and Sparks hope Mower Soil and Water Conservation District will receive more money from Reinvest in Minnesota for projects that help reduce water flow.

While Mower SWCD officials aren’t applying directly for DNR flood mitigation funds as of yet, they may do so starting next year when their hydrological modeling of the entire watershed is complete. Until then, they aim to keep doing more stream flow projects north of town.

House and Senate leaders discussed in brief Thursday several bills that could rear their heads when session begins.

Although much of the focus will be on the bonding bill and the looming Vikings stadium issue, legislators have already been drafting other measures that could get some attention.

House Minority Leader Paul Thissen said a bill to bring back the Market Value Homestead Credit has been drafted, and 50 democratic lawmakers have already signed on to it. MVHC was eliminated in 2011 and left many cities throughout Minnesota with no choice but to raise property taxes to make up for the loss of state aid. The city of Austin lowered its tax levy by about 4 percent for 2012, but once the loss of MVHC was factored in, it equated to a 13 percent increase.

Senate Minority Leader Tom Bakk said he’s still not sure how the elimination of MVHC snuck by everyone seemingly undetected.

“I am still very perplexed that the state Chamber of Commerce signed off on last year’s tax bill,” Bakk said. “Small businesses on main streets in rural towns … got the biggest impact.”

“I hope we’re not just keeping our eye on the business side of the equation,” Thissen added, saying middle-class families were also hit hard by the loss of state aid.

Other bills that could pop up include a measure to ban cell phone use in vehicles and a bill allowing district attorneys to carry weapons, Thissen said.

Since the session is scheduled to be quick, House and Senate leaders agreed they must avoid distractions. Thissen said there’s a potential for distractions in the form of constitutional amendments this year.

There is speculation that Republicans will try to pass a constitutional amendment to require the Legislature to have a 60 percent supermajority to approve tax increases. Also, Poppe previously mentioned chatter of a “right to work” amendment making membership in labor unions voluntary. Although neither of these potential measures were discussed in detail at Thursday’s legislative preview, democratic Gov. Mark Dayton said constitutional amendments shouldn’t be necessary, because he’s willing to negotiate all topics. He admitted he may use his veto powers, but the executive branch should still maintain involvement — something a constitutional amendment doesn’t need.