From mild to wild 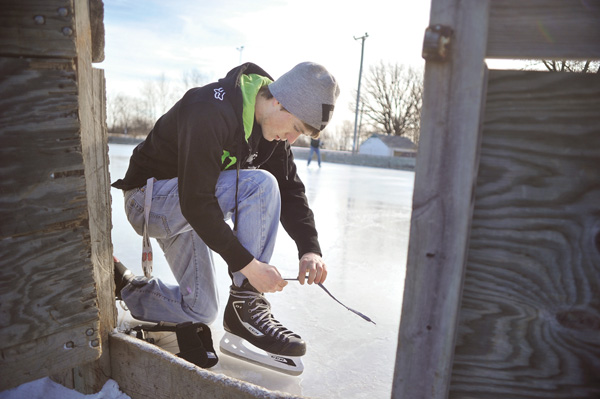 Nick Doe tightens his skates before heading onto one of the outside rinks at Kaufman Park Wednesday morning where he and friend Kyle Hegland were taking advantage of fresh ice, as temperatures have dropped sufficiently. -- Eric Johnson/photodesk@austindailyherald.com

Bar the doors and keep the heaters on: It’s going to be cold and ugly outside.

Local residents will have a frigid Thursday with temperatures below 0 degrees most of the day. 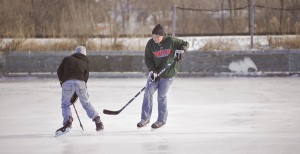 Kyle Hegland, right, and Nick Doe start a one-on-one hockey game Wednesday morning at Kaufman Park where water had just been laid down for ice.

“It’s going to be cold for the next 24 hours,” said Brad Adams, hydrometeorological technician with the National Weather Service in La Crosse, Wis.

The National Weather Service issued an extreme cold warning for most of Minnesota, where daytime highs may only reach 10 below to the north. Lows Thursday night were expected to drop to 25 below in the northeast.

A wind chill advisory was in effect for portions of western and central Wisconsin Thursday. That advisory was to expire by noon, according to the NWS.

“Cats and dogs both need to have a place to go in this kind of weather,” said Kelly Rush, Mower County Humane Society volunteer.

Outdoor pets need an insulated house with an entrance flap along with heated water dishes if they stay outside during the winter, but often the cold is just too much for animals. In addition, animals brought inside garages still need a heat source of some sort.

“The best thing to do: Bring your dog or cat inside, definitely,” Rush said.

A winter storm was expected to dump up to 7 inches of snow in southern Wisconsin Friday.

Mower County will have its fair share of snow too, with about 5 to 6 inches starting after midnight and continuing throughout the day Friday. The snow is expected to taper off around 6 p.m. Friday night.

“The bulk of the snow will fall during the daylight hours,” Adams said.

Friday temperatures will only get as high as 9 degrees. Residents may face messy roads during the commute home and should take extra caution. Though residents will experience temperatures in the upper 20s and lower 30s on Sunday, there should be more snow towards the end of next week.