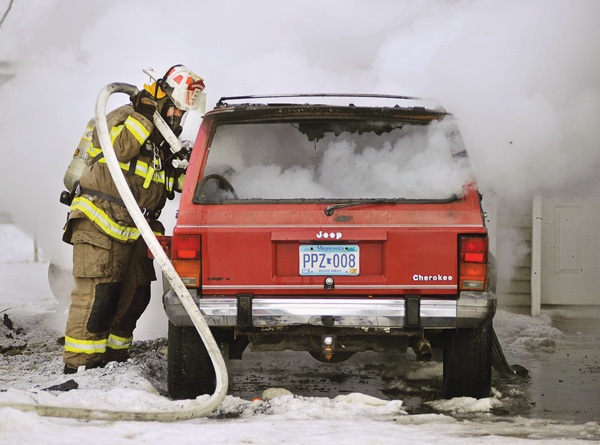 A little luck helped keep a bad situation from being worse for Steven Weber Friday morning. 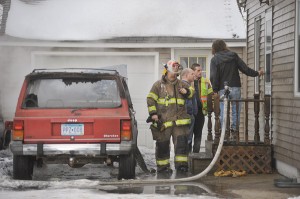 Austin firefighters look over the side of Steven Weber's home next to where his Jeep Cherokee caught fire Friday morning. - Eric Johnson/photodesk@austindailyherald.com

Austin firefighters were called to Weber’s home a little after 9 a.m. Friday for his Jeep Cherokee, which had caught fire in the driveway just feet from both his home and garage.

Weber was in his house when the vehicle caught fire and wasn’t aware the vehicle was on fire until off-duty Austin firefighters Chris Grunewald and Tim Olson, who just happened to be driving by, saw smoke coming from the area and went to investigate.

The firefighters knocked on Weber’s door, getting him out of the house along with getting a dog that was tied up near the vehicle away from the fire.

Firefighters showed up moments later to put the blaze out. The vehicle was a total loss, but the house suffered only minor damaged including a broken window, in large part due to the fact Weber’s house was covered in steel siding.

“It could have been a lot worse,” said Austin Fire Chief Mickey Healey.

The fire is being attributed to mechanical failure in the engine compartment.

An Austin cat shelter is downsizing because the director has been cited for having too many cats. Mary Draayer, director... read more