An Austin cat shelter is downsizing because the director has been cited for having too many cats. 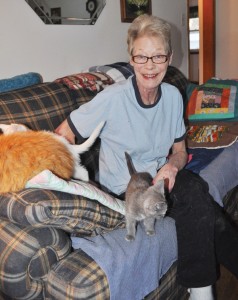 Mary Draayer, director of Cats Off Broadway shelter, is downsizing the shelter after a misdemeanor charge for having too many cats. - Amanda Lillie/amanda.lillie@austindailyherald.com

Mary Draayer, director of Cats Off Broadway shelter, appeared in Mower County District Court on Thursday morning to plead not guilty to the single, misdemeanor charge.

“The city’s been involved, the authorities have been involved and now Human Services is involved,” Draayer said Thursday afternoon.

Draayer, who has about 30 cats at her shelter, said she was given the citation because she is violating a city ordinance. However, she claims she shouldn’t be at fault because the citation was written out to her personally and not to Cats Off Broadway. Draayer only owns three of her own cats. The rest are technically owned by the shelter.

“I don’t even know if they’re aware of the fact this is a shelter, because the ticket is written to me and not to Cats Off Broadway,” she said.

Draayer’s next court hearing is scheduled for Aug. 31, and she plans to continue operating her shelter in the meantime. However, she hopes to adopt out some of the cats between now and August — partially because of the citation and partially because she hasn’t been approached for as many adoptions recently and would like to have fewer cats in the shelter.

“I don’t know what’s going to happen between now and August,” Draayer said. “I know they want me to try and change my address, but that’s not going to happen.”