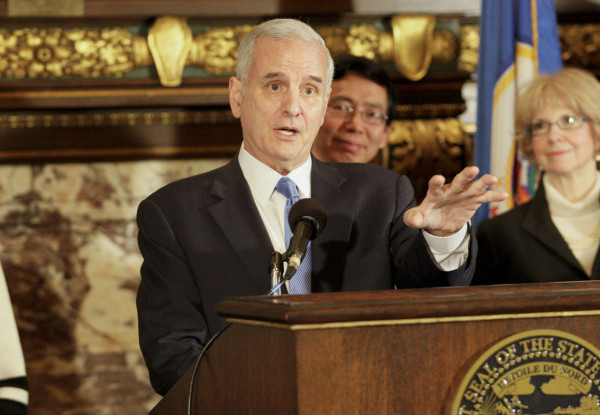 The Hormel Institute got a lot of love from Gov. Mark Dayton Tuesday.

Not only did Dayton include $13.5 million for an Institute expansion in his $775 million bonding wish-list for the 2012 legislative session, but it was one of three projects he highlighted as examples of what could provide substantial economic growth for the state.

“This bill is our chance to put thousands of Minnesotans back to work by investing in important projects throughout our state,” Dayton said in a release.

Institute representatives — including its executive director, Dr. Zigang Dong, and director of public relations, Gail Dennison — attended the event at the Capitol. 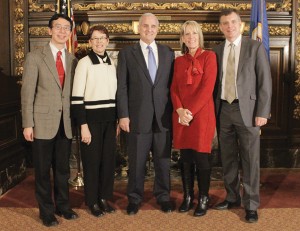 “We’re thankful to be on the bonding bill, and we’re very thankful to the Governor for noting (the expansion’s importance),” Dennison said.

Institute officials have said the $27-million expansion would double The Institute’s size and create 125 jobs with starting salaries between $40,000 and $50,000. But first, the cancer research center needs the $13.5 million in state bonding funding Dayton is proposing.

The $13.5 million in state funding Dayton is backing was originally requested by the Austin Port Authority. State house and senate capital investment committee members toured The Institute last fall in response to the request.

The other half of the funding would come through an Austin Port Authority bonding issuance, meaning the port authority would own the expansion and The Hormel Foundation would be in a contractual agreement to make bond payments.

Dennison said The Institute’s expansion would not only create over 100 high-paying jobs in cancer research, but it’s also in a field — bioscience — that would keep Minnesota globally competitive.

“Minnesota can be the best in the world in this area,” Dennison said.

Dayton’s request also includes $78 million for University of Minnesota building projects, and another $63.5 million for MnSCU campuses. It also features money to build a Saint Paul Saints ballpark in downtown Minneapolis, $35 million for the expansion of the Rochester Mayo Civic Center, and a down payment on design and construction of a light rail line to connect downtown Minneapolis with its southwestern suburbs.

The Democratic governor’s administration estimates the bill would create up to 21,700 new jobs.

The deal also includes about $30 million to repair at least 82 of the state’s roughly 960 bridges in need of significant maintenance, according to the governor’s plan.

Commissioner Ray Tucker said the county board is staying aggressive on bridge repairs.

“We’re continuing our program to try and get those all replaced,” he said.

The bonding requests will be approved or denied by the capital investment committee toward the end of the 2012 legislative session.

— Jason Schoonover contributed to this report.