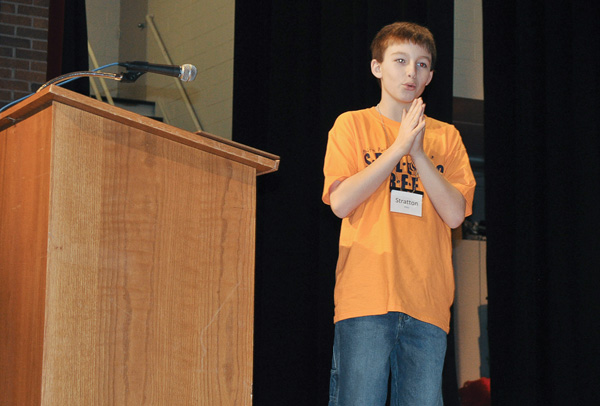 There was one speller to rule them all. 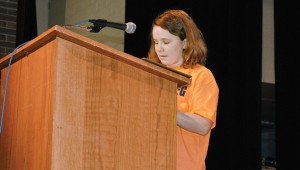 Stratton, who placed fifth in the sixth-grade spelling bee to get into the district bee, didn’t study for the bee. To be honest, he didn’t even know the spelling bee was on Wednesday.

Feist, who said she was nervous, studied hard words in anticipation.

“I didn’t think I was going to do this well,” she said. “I’m going against eighth-graders and they know more words.”

Their competition dropped quickly, with the final four left on stage less than an hour in. After three more rounds, only Stratton and Feist remained.

The two went back and forth, spelling academic, flowery words with ease, until Stratton had a chance to capitalize on an incorrect word by Feist. Stratton entered into a one-word round, where he only had to get the next word right to win. He couldn’t capitalize on his first chance, however.

Feist concentrated on her own words. She said she felt lucky to get as far as she did.

Stratton eventually emerged victorious, however, catching a word he finally knew. He couldn’t keep a straight face while he was spelling.

“I don’t win too many school contests,” he said with a grin.

Stratton, Feist and eighth-grader Alicia Skolte will advance to the regional spelling bee as Austin’s first, second and third place spellers. Though Stratton may have won today’s battle, he may not have beat his cousin in the proverbial spelling war yet.