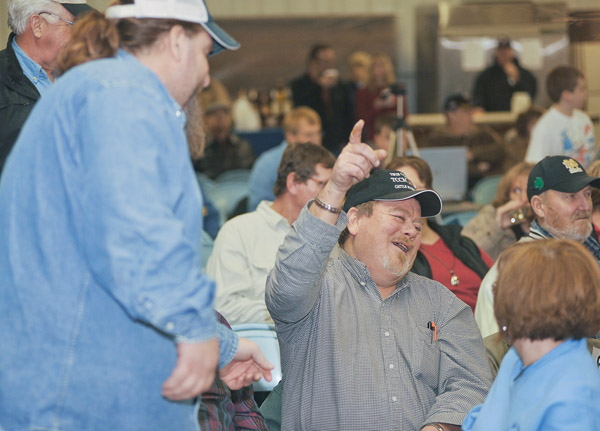 Russ Bissen of Staceyville, Iowa bids on an items during the first night of the annual Lyle Area Cancer Auction Friday night in Lyle. - Eric Johnson/photodesk@austindailyherald.com

Lyle brought a year’s worth of work and the efforts of hundreds of volunteers to its annual crescendo this weekend.

The Lyle Area Cancer Auction (LAC) returned for its 33rd year to raise money for cancer research at facilities like the Hormel Institute, the Mayo Clinic and the University of Minnesota.

“It’s the best thing that ever happened to this small community,” said Duane Corson, who’s been volunteering with LAC for more than 20 years.

While a small core committee organizes and coordinates the auction, it’s the efforts of hundreds of volunteers, donors, auctioneers and groups that have helped the auction raise more than $138,000 last year. LAC has raised more than $1 million in its 33-year history, and has gradually increased annual earnings by adding in events throughout the year like the Halfway to January Cancer Bash and the Lucille Johnson Pool Tournament.

“They love raising money for cancer because we have fun doing it,” said Ricke, who noted everyone has been touched by cancer.

The auction is truly a community effort. 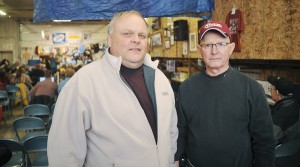 Jeff Helle and Duane Corson, right, co-owners of Agri-Steel have been a major part of the Lyle Area Cancer Auction including cleaning the building the auction is held in and sponsoring the Harley-Davidson raffle as well as donating items to be auctioned. - Eric Johnson/photodesk@austindailyherald.com

“It’s’ a complete mix of people working together in the community,” Corson said.

Corson and Jeff Helle, who co-own Agri-Steel, have long sponsored the Saturday Harley-Davidson raffle, which brings in about $20,000 each year.

Corson and Helle do more than the raffle. The two and Agri-Steel employees help powerwash and clean Lyle’s maintenance garage to house the auction. Corson, who lives in St. Ansgar, Iowa, also donates tools to the auction and helps out throughout the year.

“Anything that we can do to help we try to do,” he said.

But few rush to take credit for the auction, and most point to the collective effort.

“We wouldn’t have this kind of success if it wasn’t a large number of people that got involved and dedicated themselves because they know how important it is,” he added.

“It’s a community thing, and we all know someone who’s had cancer,” Nelson said.

Nelson bakes about three batches of caramel each year, which she splits into about 18 bags. The bags, which contain about five pieces of caramel, have sold for as much as about $50 at the auction.

Not all of the caramel sells far from home.

“I’ve even had my husband buy them,” Marge said. “He claims he doesn’t get any at home. That’s not the truth.”

Marge noted her husband often gives away the caramels he buys.

Marge said the community has come closer together in the auction’s 33 years.

“It’s brought a lot of people into it to help with it,” she said. “It makes people more aware of cancer out there. It affects everybody.”

This year, Marge made a quilt in honor of Sharon Cimmiotti, who died from cancer last year. Marge’s husband, Roger, worked with Sharon’s husband, Gordy.

Marge and Roger also bid on items each year, and have bought Afghans made by Ann Helgeson.

Denny Helgeson said his wife’s creations have sold for as much as $200. The crafts are usually donated in honor of someone who died from cancer.

Denny said the auction shows how giving Lyle and surrounding communities are.

“It’s the kind of community we are,” he said. “Not only the Lyle community, but everyone around the area.”

Each year, diverse items go up for bid and an array of people from across the country attend.

Auction items range from the yearly — homemade breads, jams and treats — to the unique: a T-shirt signed by one of the heirs of Harley-Davidson. The shirt was donated by a man from North Platte, Neb., which highlights a growing trend of interest in the auction extending out of the area and the Midwest.

“We bring them in from all over,” said Ricke, who noted a woman from Illinois donated a pan of brownies.

Many out-state attendees have family in the region. Chris Boerjan traveled from Arkansas to serve a shift as auctioneer Saturday. His aunt and uncle Larry and Lola Boerjan talked him into coming down from the auction when he visited Lyle last year.

While the Lyle community has seen its share of controversy in the last year, most were sure any disagreements would be checked at the door.

The Lyle School Board, Superintendent Jim Dusso and the public have been at odds recently, but Ricke wasn’t worried about the tension affecting the auction.

“Absolutely that’s put off to the side for this,” he said, noting that all communities have disagreements occur from time to time.

Corson and others agreed and said this auction would be “just as good as any other year.”

Ricke said there are countless people who deserve recognition for giving back to the auction and helping it succeed each year.

“(There are) so many thank yous we can’t stress enough,” he said.

The Northwestern Singers rehearse for their upcoming winter show, "Timeless," which will be performed Jan. 21-22 at the Paramount Theatre.... read more