A 27-year-old homeless man who allegedly kidnapped his ex-girlfriend and led police on a five-hour pursuit on Jan. 11 was charged Friday in Mower County Court. 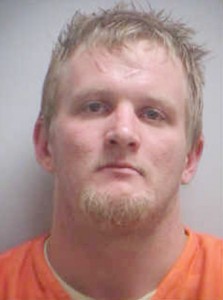 According to Sheriff Terese Amazi, Rahlf was arrested in Rochester around 10 p.m. Wednesday after at least seven area law enforcement agencies took part in the pursuit that wound through Dexter, Owatonna, Kasson and Rochester.

The ordeal began about 3:30 p.m. when Rahlf and his ex-girlfriend, Jessica Piland, 22, met at Lake Geo Travel Plaza in Dexter, so Piland could retrieve some of her belongings. A friend of Piland’s drove her to meet Rahlf. According to the court complaint, Piland’s friend said Rahlf had recently broken some of Piland’s teeth in a domestic assault.

The friend said Piland was speaking to Rahlf on the driver’s side when Rahlf opened his door and pulled Piland into the car and sped off with her legs hanging from the vehicle. However, in the court complaint, Piland’s account is different.

She states that she was on the passenger’s side and trying to grab her wallet from the car when Rahlf grabbed her hood and pulled her into his vehicle.

According to Rahlf’s recollection, Piland was trying to retrieve belongings from the passenger side when Piland’s friend approached the vehicle, which scared Rahlf, so he pulled Piland into the car while driving away so Piland wouldn’t get hurt, according to the complaint.

Piland reportedly attempted to call her friend during the chase. The friend told police screaming could be heard on one of the calls and another was a hang-up.

However, surveillance tapes obtained from Kwik Trip in Owatonna show Rahlf and Piland getting gasoline and buying pizza. Rahlf also made a phone call from the gas station pay phone, and the two stopped at Hy-Vee so the victim could go to the bathroom.

According to the court complaint, Piland told Amazi she did not try to escape because there would be “hell to pay.”

Police tracked the two throughout Mower, Dodge, Steele and Olmsted Counties. Rahlf dropped Piland off at her parents’ house in Kasson, and officers arrested Rahlf that evening at his father’s house, according to the court complaint.

The court complaint states that Rahlf has been convicted seven previous times for driving without a valid license.