Together through thick & thin 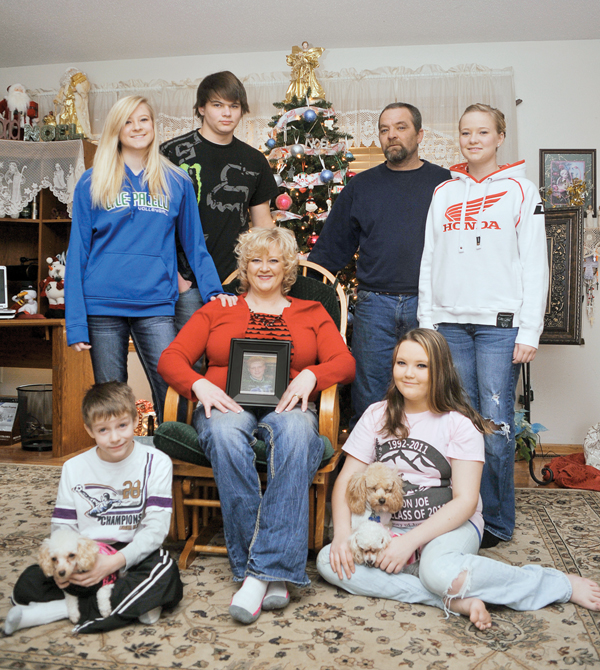 Lewisons hopeful after year of tragedies

Although Mary and Jon Lewison of Rose Creek have been through hell and back in 2011, their eyes are focused on heaven as 2012 nears. 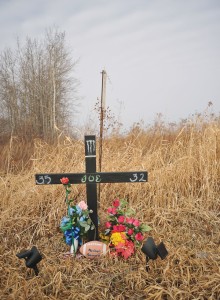 A memorial to Joe Lewison still stands at the site Joe was killed last February when a train collided with his truck. - Eric Johnson/photodesk@austindailyherald.com

The Lewisons thought nothing more could go wrong after they lost their 18-year-old son, Joe, to a car-train collision in February. That was until Jon had a heart attack, Mary lost her job and all but one of their children were in car crashes with injuries.

With a new year approaching, though, the Lewisons are trying to put tragedy behind them and face the future with hope.

“Our hope this Christmas, and our wish, is that we never ever take a single second for granted,” Mary said. “And that we love with all our hearts, and that we are patient and kind, because life is too short and goes by in a blink.”

Five of the Lewison’s six children have been in car accidents since February, including Joe’s fatal collision with a train. Barely one month after Joe’s death, three of the Lewison children — Carter, 9, Coeli, 12, and Andrew, 17 — were rear-ended nearly at a dead stop by a pickup traveling 55 mph.

Although Andrew sustained a back fracture, Carter and Coeli escaped with just bruises and soreness. Mary said the crash should have been much worse based on the circumstances.

“(Carter) should have been killed,” she said. “The pickup smashed the trunk into Carter’s backseat.”

The car was totaled, but Mary said they felt blessed that the car is the only thing they lost.

In May, 15-year-old Maggie Lewison was involved in a vehicle rollover with a friend. She didn’t have any injuries, but Mary said she heard the accident report on the scanner and recognized the address as near their house.

“I was like, ‘Really? How could this possibly be happening?’” Mary said of the crash. “What next? That’s just what you think, but you can’t live like that.”

When Mary began wondering “what next?” after Maggie’s rollover in May, the last thing she expected was to get a call two months later from an Indiana Emergency Room saying her husband had suffered a serious heart attack.

Jon was on the road for work in late July when he began having symptoms of a heart attack, despite a nearly perfect physical exam a month earlier. Jon was on the phone with Mary when the symptoms began, and she urged him to find a hospital.

“He said, ‘It feels like I’m having a heart attack,’” Mary recalled. “I told him not to take any chances.”

Within a half an hour, an ER doctor had called Mary to tell her Jon was having a heart attack, and soon after Mary was on the road to Indiana.

Mary and her nephew, Conrad Bauer, 17, think stress and a broken heart may have contributed.

“With everything going on, I think the stress pushed his heart to the limits,” Bauer said. “Thankfully nothing physically has gone wrong with anyone else.”

The doctor in Indiana told Mary that Jon’s heart attack was a “widow maker” and that Jon would have likely died had he not arrived at the ER the moment he did. Widow maker heart attacks leave a very small window, sometimes as little as five minutes, for resuscitation.

“He got there in the nick of time,” Mary said. “At that point, I literally said, ‘I don’t dare ask what’s next.’ And then the next thing happened.”

Two months into Jon’s four-month leave of absence from work, Mary was fired from her job for poor attendance in 2011.

“It was detrimental,” Mary said. “I can’t help the fact I had to bury my son and take care of my husband after he had a heart attack.”

Losing her job was nearly Mary’s breaking point, she said. In a year full of expenses for a funeral, a totaled car and medical bills, the last thing the Lewison’s pocketbook needed was another blow.

On top of the job loss, Jon was still weak and recovering from his heart attack.

“It was tough,” Mary said. “Then depression sets in even more so when you feel like you can’t do anything.”

Being Christians, Mary’s family looked to God for guidance and strength. That’s when things started falling into perspective.

“When you think about the things we’ve been through, we aren’t the only family who is facing troubled times and difficult moments and loss of jobs,” Mary said. “Instead of getting angry with God, we as a family have turned it into strength by really looking at it and trying to listen to what God is saying to us.”

Mary believes that everything from Joe’s death to her job loss was part of God’s plan. There was no choice but to look to heaven, both for Jesus’ guidance, but also for Joe’s blessing, she said. 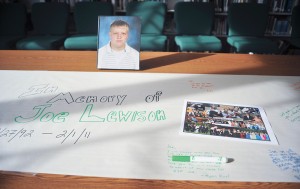 Notes and signatures adorn a memorial to Joe Lewison in the Pacelli library. Lewison died in February when his truck collided with a train south of Austin. - Herald file photo

Dec. 25 marks the Lewison family’s first Christmas without Joe. Although Mary said the family is struggling to have holiday cheer without him, they want to celebrate Christmas the way Joe would have wanted.

“As we approach our first Christmas without Joe … each one of us has pain that is still so very raw,” Mary said. “Instead of presents, the kids want to have Christmas here at our house with all our families and celebrate it ‘Joe style.’”

One of Joe’s most-loved activities was family gatherings; Mary said he would be the life of the party, reminiscing on past holidays and making everyone laugh with his fun-loving personality. But even though he won’t be physically present at the Lewison Christmas this year, Mary believes Joe will be present at Jesus’ birthday celebration in heaven.

“Thanksgiving was tough,” Mary said. “For us, Christmas has slowed us down and made us really realize what is truly important.”

Joe’s presence is strong in the Lewison household, Mary said. That presence and the peace it brings has played an integral part in the healing process for Mary, Jon and the kids. Jordan Lewison, 20, was extremely close to Joe, according to Mary, and said he appears in her dreams sometimes.

In fact, Jordan’s choice of college stems from a dream in which Joe told her she should apply to the University of Wisconsin in Platteville. Even though the dream happened just eight days before the semester was supposed to start, Jordan applied, was accepted and now attends school in Platteville, Wis.

Maggie has also had seemingly supernatural experiences with Joe, she said. After Joe’s death, Maggie’s classmates wrote their condolences in a journal for her. Maggie was paging through the journal this summer when she came across a message she, nor anybody else, had seen before. It read: “Maggie, take care of mom and dad. I love you, Joe.”

“It was his handwriting,” Maggie said. “I’ve gone through that (journal) before, and I’ve never seen it.”

Mary said she’s seen Joe in her dreams, too.

Although some of the dreams are difficult to wake up from, Mary said she cherishes her memories and conversations with Joe. His main message to Mary in her dreams is that everything is going to work out.

“Each of us feels (his presence) at our own certain times from Joe,” Mary said. “I hear him telling me it’s OK.

“Although each one of us grieves differently, we are united in comfort and our faith for God has allowed us to fully understand that Joseph was a precious gift to all of us.”