Whitesidewalls to rock the Paramount 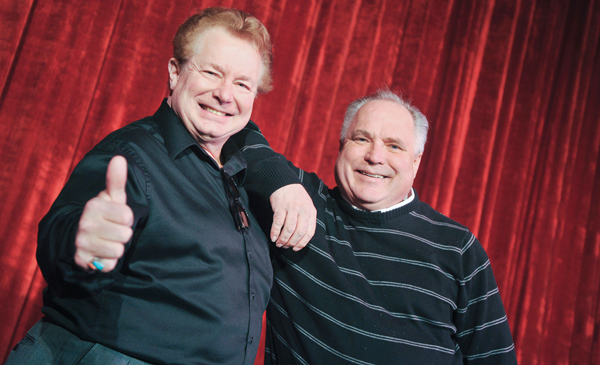 Pat Brown, aka “Hound Dog,” and Dave Swanson, aka “Swanee,” are the two original Whitesidewalls members still with the band. The Whitesidewalls will play this Thursday at the Paramount Theatre. -- Herald file photo

The Whitesidewalls are coming back to town.

The touring crew formed in 1972 is back in action at the Paramount Theatre this Thursday. Though it has been almost eight months since they came to Austin as part of their reunion tour, the band made a few changes, recorded an album and is growing at a monstrous pace.

The band plays rock ’n‘ roll from 1954 to 1964, often referred to as the golden era of rock ’n‘ roll. Using a chorus-like atmosphere, crazy get-ups and larger-than-life personas, the Whitesidewalls tap into nostalgia and Americana in a way few bands can, and with plenty of songs.

“When you consider the 10 year period that we stick within, the amount of material that’s available that we never got to play even in the old days, let alone now, is almost like a bottomless well of new material,” Brown said.

The group is working on more than just new material: they’ve added a fifth singer, “Rocky Beaumont,” after the group reformed about two years ago.

“Everyone is a lead singer,” he said. “There’s no lead guy. It’s a rotating show.”

“It was a labor of love,” Swanson said.

The band is gaining steam since it reformed, adding more dates and securing a night at the Surf Ballroom as part of the annual Buddy Holly tribute.

The Whitesidewalls will get the Paramount rockin’ starting at 7 p.m. Thursday, Dec. 1.

Barefoot for a cause

Shelley LeTendre will be running barefoot in an effort to raise suicide awareness as well as money. -- Eric Johnson/photodesk@austindailyherald.com... read more