Pro wrestler down but not out

Perry Satullo spent most of his adult life under bright lights, entrenched in the pandemonium that is professional wrestling. 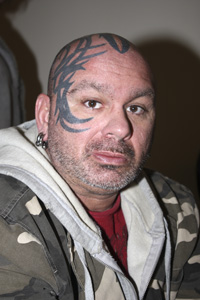 But he has also spent time living on the streets.

After a long bout with drug addiction, which led to Satullo becoming homeless, the former superstar — known around the wrestling world as Perry Saturn or — decided it was time to turn his life around and make a comeback. That path brought the former star to Albert Lea.

“I’m very lucky to be a wrestler to begin with, and I screwed it up because of drugs,” said Satullo, a Boston native. “I’m going to make sure that if I do get a second chance, I’m going to make the most of it. I’m not going to waste it.”

On Oct. 13, Satullo made his return after being out of the ring for more than nine years. He appeared at Awesome Wrestling Entertainment’s’ Night of the Legends pay-per-view in Fisherville, Va.

Saturn, who has been drug-free for more than three years, was victorious after a sunset flip put his opponent, C.W. Anderson, on his back for the 1-2-3.

“He is a very good wrestler,” Satullo said. “It went very smooth. C.W. Anderson was great to work with.”

During the match, Saturn’s only regret was not realizing the floors were not padded like he was used to in World Championship Wrestling and in World Wrestling Entertainment.

With Anderson lying on the ground, the 45-year-old ran and dove at his opponent, suffering the consequences of the solid concrete.

“I never paid attention or even thought, but there were no pads out there,” he said. “I smacked down on the cement and busted my head open.

“I’m still bruised and sore from it. I would have never done it without the pads.”

Even for someone who has been through as much as Satullo the match returned a sense of satisfaction and self-worth to the entertainer.

“It was satisfying,” he said. “Knowing how hard it was to get there, It was worth it. If nothing else ever happens it was still worth it to get there, because that is still better than where I was.”

Even fellow wrestlers noticed Saturn’s ability in the ring during AWE’s Night of the Legends.

Diamond Dallas Page was one of those stars on hand for the AWE pay-per-view.

“He came back and had a good match,” he said. “He was out the doing some things like diving to the floor — it was crazy.

“He wanted to test himself and he passed with flying colors.”

Satullo’s career began in the early 1990s in smaller wrestling circuits around the country. He also wrestled internationally in Japan.

When he moved onto the WWF, Saturn pursued and won the European Championship title and was also the Hardcore Champion on two occasions.

A torn anterior cruciate ligament sidelined Satullo from the WWF in April 2002, and he was released from the organization a short time after.

Satullo said during his last few years in the WWF he became a user of illegal substances and began abusing them to the point where he doesn’t remember years of his time on the show.

“I screwed up really bad on drugs the last few years of my time in WWF, and I continued to tailspin out of control,” he said.

He added that his drug of choice at the time was an opium-based analgesic called Nubain. It was injectable, and he would shoot it under his tongue.

Satullo said his drug use was the reason he didn’t immediately return to wrestling after rehabilitating his torn knee ligament.

“By then I was really bad on Nubain,” Satullo said. “One time when I was still working for the WWF, but at home with my knee surgery, they were in Atlanta. It was where I lived at the time, so you go down to the building and see everybody.

“I made it to my car, did so much Nubain that I passed out, and didn’t wake up until the show was over. I never even made it down to the arena.”

Following his release, Satullo fell even further into the pit of drugs and lies. He began using methamphetamine, also known as crystal meth.

“I lost everything in the blink of an eye,” he said. “It is amazing how fast it happens.”

At one point he received two gunshot wounds to the upper torso. One in the shoulder and once in the neck. He said he was in the wrong place but was not in the wrong.

Saturn said he fell from a prominent athlete to a drug-addicted thief living on the streets. He went from the top of wrestling entertainment to rock bottom.

Leave it to man’s best friend to make a difference in Satullo’s life.

His dog, now 11-years-old, was with him through it all, the drugs and homelessness.

And the pet is the reason he eventually began turning his life back around.

“I was so worried about what would happen to her if I died that I had to hang on until after she died,” Satullo said.

During his cling to life, he began to realize if he can hang on for his dog, he could change his life. It was then Satullo stopped using drugs.

He met his future wife, who was also a homeless drug addict at the time. He said together they used each other as a crutch to escape the addiction. Eventually Perry and Lisa married, and they just celebrated their one year anniversary. Lisa had family around the Albert Lea area, which brought Saturn to live here.

“I have plenty of regrets, but I don’t let them weigh on me because I can’t change them,” he said. “Everything I did, I can’t make crooked straight, but I can change what I do tomorrow.”

Since his move to the area, he had to find a way to forgive himself for the last few years before he could pursue a comeback to the ring on a national stage.

“First I had to forgive myself. I really hated myself,” he said. “I was embarrassed of the person I became — and it was my fault, but I’m changing now.”

For more than the past year, he traveled to conventions in an attempt to rejoin the world that he was once a part of.

He has talked to guys like Dean Malinko, Triple H, Raven and DDP for advice on how to get back into the business.

“DDP is doing far and beyond something that I expected to help me,” Saturn said. “We’re like a fraternity. Everybody is helping each other out.”

DDP held an interview on his self-hosted video series: DDP-TV, which just went viral, giving awareness to Saturn’s return. The wrestling star has made it a point to set Satullo up with web designers and a link on DDPbang.com to book Perry Saturn for upcoming events.

“We gave him awareness,” Page said. “People can see that he is clean, looks great and he’s bookable.”

Satullo also noted that if he could have brought himself to ask for help during his addiction, he could have turned to the WWE’s chairman of the board and CEO Vince McMahon for help in entering a drug rehab.

McMahon offers rehabilitation programs to all of his wrestlers even if they aren’t under contract with the WWE at the time.

“I’ve dug myself a pretty big hole,” Satullo said. “And I’m getting out of it.

“Today, I know that it will be better tomorrow.”

Taking the next steps

Following Satullo’s pin-fall over C.W. Anderson on AWE’s pay-per-view, he returned to Albert Lea with something he has been missing for more than nine years: self-worth.

“I was homeless for two and a half years, and addicted to meth,” Satullo said. “You lose all that self-worth and purpose. I get all of that from wrestling.”

He uses free-weights and cardio equipment at the fitness center. DDP also gave him a few copies of his new DDP Yoga series that is set for release on Nov. 21.

“It puts together mixed martial arts, calisthentics, yoga and cardio,” Page said. “It is zero-impact, and helps with flexibility and core strength.”

All of the work has begun to pay off for Satullo. He said after his match with C.W. Anderson he was tired but he thought he would have been worse.

“I was blown up, really tired, but no where near as bad as I thought I was going to be,” Satullo said. “I’ve done nothing with wrestling during this time and I got it back just like that.

“Jokingly I was telling my wife, ‘I hope I don’t have a heart attack.”

Although he isn’t in the shape he wants to be in yet, Satullo said he is getting there.

He knows that it won’t take long to get back in shape because once he gets into the ring on a normal basis his endurance will return.

Saturn’s goal is to return to the top of the wrestling entertainment world on WWE.

“I’ve got something left in me, and I want to give back,” Satullo said. “I don’t know where it’s going to be but it will be somewhere.”

It doesn’t matter where his future matches are, but he hopes that he can earn the chance to prove that he still has what it takes.

Currently, Satullo is putting all of his time, energy and resources into doing whatever it takes to get back what he once had in the ring.

At his AWE pay-per-view event Saturn appeared in the ring in nothing but normal denim jeans, sort of like what he wore as a member of the Flock in WCW. He said custom boots and wrestling gear costs money, which is something that he doesn’t have right now.

Leaving behind a legacy

“I really wish I could feel the way I do now without going through everything I did,” said Satullo, describing the lessons he’s learned over the past few years. “It is easy to take stuff for granted.”

Every day is a new day for the former star and anything can happen.

After all that he has been through, he knows that in order for his comeback to be complete he will have to earn back the trust of the major wrestling organizations before someone will take another chance on him.

Satullo said he hopes his story can give others the inspiration to change, even when they are living in a world where they think there isn’t any hope left.

“I’m not arrogant enough to think that my story can prevent somebody from screwing up,” he said. “But I hope if someone is down and out, without any hope, they can say, ‘Wait a minute. It could happen.’ I hope to make a difference for somebody else.”

In the ring Saturn just hopes to leave behind a legacy that is respected by fans.

“I’m very liked and respected among the wrestlers,” he said. “I hope the fans enjoyed my work.”

Satullo has been working on getting more opportunities to be in the public spotlight. He has a autograph session slated for Nov. 12 in New York and another match lined up at the end of the month.