The fastest skid loader in America?

Jake Stier will soon find out if he is the fastest man in the U.S. — in a skid loader. 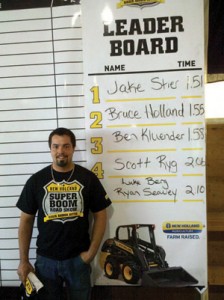 Though Stier is new to skid loader competitions, as he competed in his first event in Albert Lea on June 4, he’s no rookie. Stier, who will soon be 27, has operated skid loaders for roughly 20 years, and he’s not afraid to push the limits. After operating skid loaders for so long, he said he’ll sometimes try to pick up multiple objects at once or find new, interesting ways to complete tasks. Known by many as a wheelie expert on motorcycles, ATVs and other machines, Stier has applied those talents with skid loaders, too. He can ride wheelies and shift gears in the process.

“It just actually kind of comes naturally,” he said about driving skid loaders. “I feel comfortable when I’m doing it.”

When Stier and others found out about the Albert Lea competition at Titan Machinery Inc. in June, they decided to check it out. And even after Stier threw down the best time, he didn’t think much of it.

Complete information about the New Holland Construction Super Boom Road Show is located at www.newholland.com/roadshow. Stier’s fans can follow his progress during the championship competition on Oct. 27 on Twitter at twitter.com/ newhollandce.

Nonprofit wants to hear about pre-schools

Have a story about Austin’s pre-school programs? There’s a non-profit who wants to hear from you. The Ready 4 K... read more