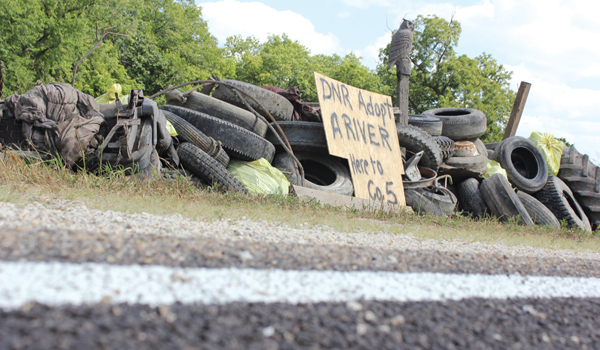 A pile of tires and trash pulled from the Cedar River sits next to Highway 105 south of Austin. Volunteers removed the trash as part of the Department of Natural Resource's Adopt a River program. - Matt Peterson/matt.peterson@austindailyherald.com

Several miles south of Austin, along Highway 105, a massive pile of tires has sat next to a sign for several days. The sign reads: DNR Adopt a River, here to Co. 5.

Saturday, five volunteers cleaned that stretch of the Cedar River, from several miles south of Austin to County Road 5. Their efforts were cut short by too much trash.

“It’s unbelievable what people throw into the river,” said Judy Mullenbach, wife of one of the volunteers. “The tires are just crazy.”

Through the Department of Natural Resource’s Adopt-a-River program, volunteer groups each take a portion of the Cedar River and make a two-year commitment to clean it. But next weekend, Mullenbach’s husband, Todd, his brother, Al, and others will clean the stretch they were unable to complete, as they heaved roughly 80 tires buried in sand and muck, including a rear tractor tire.

As the volunteers’ pile of tires grew, passers-by stopped with curiosity, and many complimented the group’s effort, Mullenbach said.

County workers will dispose of the trash, including whatever the volunteer group finds this Saturday.

“People just need to know what’s being dumped into our rivers,” Mullenbach said.