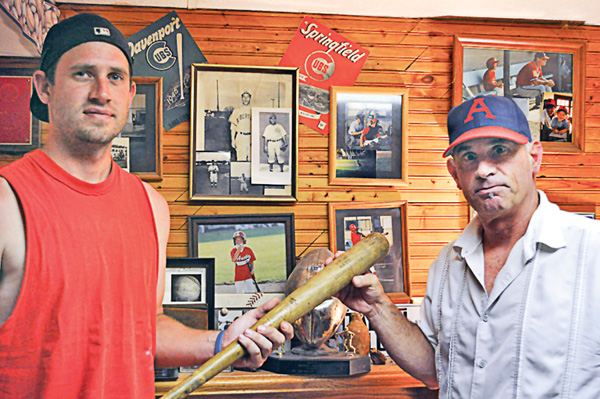 Matt Raso, left, holds his grandpa’s bat with his dad Mike Raso in Mike’s basement in Austin. Matt’s grandpa Joseph Raso used the bat when he was on the Chicago Cubs’ roster for six weeks in 1946. In the background are pictures of Joe when he played in pros and minor leagues the 1940s. -- Rocky Hulne/sports@austindailyherald.com

Step into the basement of Mike Raso’s home in Austin and it’s almost like walking into a baseball time machine.

Amongst the many photos covering the walls, there’s the picture of Mike’s dad, Joseph Raso, when he made the Chicago Cubs roster for six weeks in 1946, a football award that Joseph won at a high school in Boston, a picture of Mike coaching his son, Matt Raso, and a picture of Matt playing for the Austin Greyhounds.

The last picture takes you to the present as Matt is still catching for the Hounds, who will host Section 2B tournament games this Saturday at 8 p.m. and Sunday at 2p.m. at Marcusen Park.

To fully know the backstop of the Hounds and the story of the Raso’s love for baseball, it’s best to start in the past.

Joseph Raso came from an Italian family, but he was born in Boston in little Italy in a house that was across the street from where Paul Revere had once lived. He never knew his dad and his mom died when he was seven, so he was raised by uncles, cousins and siblings. He went on to become a very successful high school athlete in baseball, football, track and basketball.

Joseph was so good that he received athletic scholarships at Villanova University for football and basketball, but he quickly walked out on that to tryout for the Boston Red Sox at Fenway Park. While he didn’t make Boston’s roster, he was spotted by a scout for the Chicago Cubs and was signed to play in their minor league system.

He went on to play for the minor league teams in Davenport, Iowa and Janesville, Wis. for eight years, but it was his six-week stretch as an injury replacement with the Chicago Cubs in 1946 that stood out most. Two years after he came back from a two years of service in the navy in World War II, Joseph was called up as an injury replacement and while he didn’t play, he was a major leaguer.

“He was close to actually making it (in the big leagues) before the war. When he got back (from the war), baseball kind of changed and it was about the power hitters. My dad was a little guy. I’m bigger than he was and I’m little,” Mike said. “Back in those days, players were a dime a dozen and if you signed a contract, you were one of the lucky ones.

Joseph lasted in the minors until 1949. After that, he came to Austin to play for the Packers under Emil Schied and he got a job at Hormel’s.

He played with the Packers from 1951-1962 when Austin drew about 3,500 fans a night and was winning plenty of state championships. Mike saw his dad play for the last few years of that run and he fondly recalls those days.

“Those teams had a lot of ex-minor leaguers and it was about as good as watching the major leagues,” Mike said. “My dad came from nothing. I look back and I say, my dad had nothing but look what he’s left. He’s left a legacy as far as I’m concerned. He was a great athlete and baseball was his love.”

Mike, who played baseball at Austin High School, Iowa Western Community College and semi-pro baseball in Fort Worth, Texas for a year before coaching baseball for 30 years, is starting to think back to those days as he’s been watching the Hounds play this summer.

The Hounds finished the regular season with a 22-9 overall record and they lost just one section game throughout the year.

“What these guys are doing now is reminding me of when I was a little kid watching my dad play. It’s like deja vu,” Mike said. “They’re successful and it’s fun to watch.”

For the love of the game

Growing up in a baseball family, it didn’t take Matt too long to find out that baseball was his love.

“My grandpa (Joseph) died when I was six, but I have vague memories of him,” Matt said. “I used to drag my dad off the couch after work to go out and play catch every day.”

Matt recalls playing stick ball by Shaw School and he said that playing sports was just something he and his friends did growing up. He went on to be a three-year starter at Austin High School and he was able to catch for Mike Wuertz, who now pitches for the Oakland A’s, his sophomore season.

“I loved it and I just kept with it. Baseball’s a game that’s fun if you can be successful,” Matt said.

Matt went on to play at Iowa Western like his dad. That team went 52-17 overall and it just missed the junior college world series.

“My eyes were completely opened,” Matt said of his first year at college. “The game is way more detailed than you ever learned it in high school. You get to college and it’s like, ‘I had no idea that there’s three ways to lead off from first base.’ It’s the little parts of the game you start learning.”

After that season, Matt went on to play at St. Cloud State University on a partial scholarship for one season before ending his college baseball career.

“I kind of hit a burnout period and as a catcher between playing so many college games and so many games in the summer,” Matt said. “I kind of regret not doing four years. I should’ve made some different decisions.”

But after college, Matt was able to pick up where he left off when he joined the Greyhounds in 2000. Since joining the squad, he was a part of two state championship teams and he has played in 10 state tournaments — since he was usually drafted by another team when the Hounds didn’t make it to state.

Through it all, Matt, who has been the Hounds’ primary catcher for more than a decade, has put up with plenty of bruises while stopping pitches behind the plate. This summer alone, he’s taken shots to the shoulder and the Adam’s apple. His catcher’s mask is nearly flat from the beating its taken.

Still, he doesn’t mind the pain as he embraces his role with the Hounds.

“It’s been kind of like a fraternity. It’s just playing in the summer time with some great guys on some great teams,” Matt said. “It’s been a hell of a ride and I’ve always said as long as I’m able to catch and play, I’ll get it out of my system before my body goes out. It’s in the blood.”
The future of the game

As they look forward to the future of baseball in Austin, Matt and Mike both agree that they don’t see the same love for the game in youths any more.

“I never played on a losing baseball team in my whole life. I was old school,” Mike said. “Now things have changed and it’s like the dedication and the passion isn’t there with kids. When I coached Matt’s Legion team, those kids had dedication and it was a joy to coach, because they wanted it just as bad as the coaches did.”

Besides playing, Matt has also coached at the high school level for seven years. While he’s watching major league baseball almost every night during the summer, he’s surprised by how little some of the younger players are paying attention.

“These kids today don’t watch the games anymore or they’ll just watch for homeruns,” Matt said. “I tell them to watch it and pretend like you’re playing the position and go what you need to do.”

If baseball is to make a comeback in town, it’ll take more families like the Raso’s to make it happen.

BY BOB AND GINNY RIEGE Walleye fisherman and bass fisherman have debated for years about what is more important structure... read more