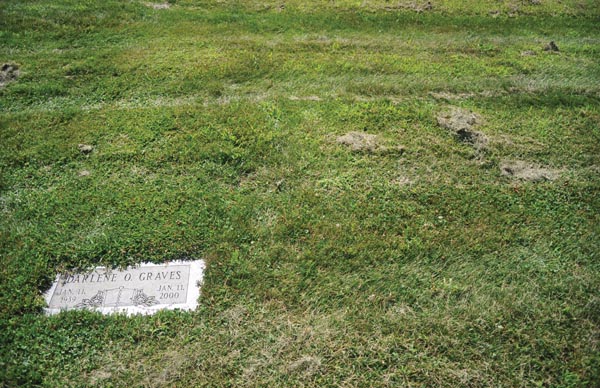 Lying next to the grave of Darlene Graves in Oakwood Cemetery is her brother Jackie Graves, one of the top fighters in the nature during the 40s. A movement is being started to get a gravestone for Graves. - Eric Johnson/photodesk@austindailyherald.com

Near the southeast corner of Oakwood Cemetery, a few steps north of South Avenue and 100 feet from the Cedar River lies a small plot for the Graves family.

But unbeknownst to the casual observer, one spot north of Darlene Graves, facing west, rests Charles’ and Mary’s son Jackie, a World Boxing Hall of Fame member and one of Austin’s claims to fame, in an unmarked grave.

National boxing writer and Minnesota boxing historian Jake Wegner calls Jackie Graves — a 1940s featherweight fighter nicknamed “The Austin Atom” — one of the top boxers of the era. He lived in Austin nearly all his life, died Nov. 15, 2005, at Good Samaritan Center in Albert Lea and was buried a few days later next to his sister, Darlene, in Oakwood Cemetery.

But you wouldn’t know that by looking.

Now, several people in Austin, including Mayor Tom Stiehm, want to change that.

Stiehm is spearheading a fundraiser to get Graves a headstone. He said they are in the early planning stages, but he hopes to get it rolling soon and raise about $2,000. Jeff Anderson, of Anderson Memorials in Austin, said his business will cover part of the cost.

Stiehm said it’s a shame Graves doesn’t have a headstone.

“He’s one of the best athletes ever to come out of Austin, and he’s in an unmarked grave,” he said. “He means a lot to the community. … I know from talking to a lot of people that he’s a point of pride. He’s someone we should recognize.”

“We could honor (someone) new each year, and Jackie could be the first,” Stiehm said of the memorial idea. “A lot of people deserve recognition.”

Wegner thinks the memorial is a great idea.

“(Communities) should be proud of guys in his shoes,” Wegner said of Graves. “It’s always a shock to me (that he hasn’t been honored).”

Jackie Graves, widely considered one of the best boxers of his time. - Photo provided

Who was Jackie Graves?

Graves was born on Sept. 12, 1922. He had four brothers and nine sisters, according to his obituary, and worked at Hormel Foods before he turned professional.

Even as an amateur, Wegner said, Graves garnered a lot of attention. Known as the “Hormel Hammer,” Graves was in a headline fight in his 1944 professional debut.

“I don’t care how famous you are in the amateurs, you aren’t going to be the main event,” Wegner said. “And Graves was the headliner in his debut.”

From there, Graves climbed the professional ranks, and by 1946, was the No. 2 ranked featherweight boxer in the world behind Willie Pep.

He stayed in the top 10 for several years, and finished with a professional record of 82 wins — including 48 KOs — 11 losses and two draws. He had a few shots at the title, but never won it. Wegner said Graves’ stay at the top of the boxing world was impressive, especially for that era, when there were only eight divisions compared to 17 today.

“Back then, to be rated in the top 10 was incredibly hard to do, and he was rated there for years,” Wegner said.

The famous third round

Graves had more than one shot against Pep, and in 1946, the two squared off in Minneapolis in an infamous fight where Pep allegedly won the third round without throwing a punch. Unfortunately, Wegner said, it’s what Graves is known for, and it’s not true.

Pep won the fight by a TKO in the eighth round, but the third round made the bought famous.

“It’s the equivalent of Babe Ruth calling out his home run, and then magically hitting that home run,” Wegner said. “What a magical story. Babe Ruth did it. Pep didn’t.”

Wegner researched the fight, and after digging through archives of the Minneapolis Star Tribune and St. Paul Pioneer Press, found several accounts calling the third round “the most rapid round” of the night and that “a clicker couldn’t count the blows” that round. 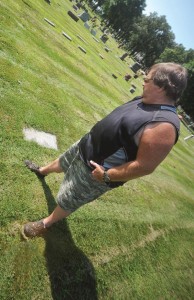 Austin Mayor Tom Stiehm is spearheading a drive to raise money to pay for a gravestone for boxer Jackie Graves. - Eric Johnson/photodesk@austindailyherald.com

Wegner’s story is backed by a 2008 report by Don Stradley of ESPN.com. According to Stradley, the punchless third round wasn’t mentioned until May 1970, in a Pep interview, 24 years after the fight.

Still, the story lives on.

A nice guy …out of the ring

According to Wegner, Graves was the “nicest guy you would ever meet.” Wegner interviewed Graves several times, and said he was like a grandfather to him.

“I really liked the guy,” Wegner said. “He was a class act and I miss him a lot.”

“Everybody he met, he introduced himself,” Buxton said. “He was a friend to everybody.”

But not in the ring.

According to Wegner, Graves was one of the toughest punchers in boxing.

“When (Graves swung), he ripped skin, broke bones and all sorts of nasty stuff,” he said. “Sometimes he had to cancel fights because he hit so hard.”

When Graves was fighting, Wegner said, boxing was bigger than baseball. And Graves was near the top of the boxing world.

In Wegner’s opinion, the competitiveness of boxing has declined since the 1940s, and if Graves were fighting today, he would have at least one title.

“If he was fighting today, he would be the world champion,” Wegner said. “He would have one of the belts out there today for sure. He was that good.”

“(When Graves was fighting), everybody knew his name,” he said. “That’s one thing he missed later in life, is people forget who you are.”

Now, Stiehm hopes to correct that, by raising the funds for a proper grave marker and a memorial.

Nothing, Wegner said, would please him more.

“When I came back, I was shocked to see there wasn’t a headstone,” Wegner said. “It’s a shame he was forgotten about later in life.”

To make a donation or for more information, call Stiehm at 507-437-4092. Checks should be made out to “Jackie Graves Memorial c/o Tom Stiehm.”