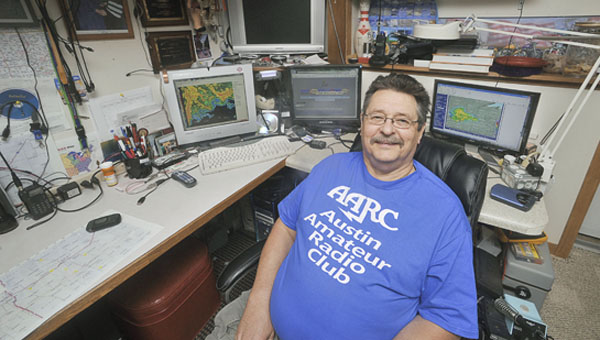 Alan Bush sits at his desk in his home where he monitors severe weather and coordinates spotters in the field. — Photo by Eric Johnson

When the skies darken in midday and lightning begins to rumble, there’s about 134 men and women who watch what happens above. They’re police officers, firefighters, radio enthusiasts and random citizens who all know what to look for when it comes to severe weather. They’re Mower County’s storm spotters.

“You can’t control the weather,” said Alan Bush, one of the lead storm spotters in the county. Bush heads up a local amateur radio club, which spends plenty of time tracking down storms this time of year.

“If we give information so (people) can stay safe, that’s probably the main drive of the amateur radio club,” Bush said.

The storm spotters are a group of people given training by the National Weather Service to help NWS meteorologists track severe weather as it moves through a region, reporting to NWS centers key information like wind speeds, cloud formations and changes in weather patterns.

“We can use the actual verification of what’s happening out there,” said Todd Shea, NWS meteorologist in La Crosse. Shea and other NWS forecasters organize spotter classes every spring, in time for the summer storm season. The classes are about two hours long and people can register for a county phone list afterwards, where they could be called to action once severe weather strikes.

“It’s kind of like a phone tree,” said Marlys Sorlie, head dispatcher for Mower County. “They know what to do. All we do is we call them out and they go wherever.”

Once NWS meteorologists give area public services notice, dispatch calls up key storm spotters like Bush, who’s volunteered for 10 years. While Bush calls other members on the list, police and firefighter storm spotters may spread out at the edge of town to spot incoming storms, depending on its severity.

Bush runs the radio club member net, who go across the county to watch for trouble.

“La Crosse will say that they need information in this particular area and I’ll send some people out there,” Bush said.

He’s got a command center in his basement, with access to two radar programs with live feeds from around the U.S., a police scanner, several TVs tuned in to local stations reporting on the weather and, of course, radios. The group’s even got anemometers, which measure wind speed, to help NWS meteorologists.

Storm spotting may not sound like much at first, but there’s plenty of excitement at the right time. A few years ago, Bush chased a funnel cloud through Mower County over by the Rochester Airport, where a tornado briefly touched down but didn’t do any damage. Another member videotaped the tornado that tore through town in 2009, getting footage of the destruction. It was spotters who first alerted NWS in La Crosse that the June 17, 2009 tornado would come to Austin.

“The spotter reports there alerted us that we had rotations in the clouds,” Shea said. “That helps with lead times and warnings.”

Normally, spotting a tornado would cause anxiety, but wouldn’t exactly be scary. That changes during nighttime storms. With only lightning to light up an area, spotters are particularly wary of going out when the sun goes down.

Bush hasn’t yet dealt with a tornado at night, but he hopes he doesn’t have to, as he’d be putting people in danger by sending them out in the dark.

“You get out at night and you can measure wind, but you don’t know for sure you can tell what’s coming right where you’re at,” he said.

Although it’s too late to sign up for spotter classes this year, there will be more offered next spring for those interested in watching the clouds. Severe weather usually starts around that time, although it’s been a little slow this year. Bush said he’s called out spotters twice this year, whereas the spotters would’ve normally been out about 15 times by then.

Regardless, Bush and the other spotters will be out the next time severe weather could strike.

“If there’s a threat, we’re out there watching for it,” Bush said.