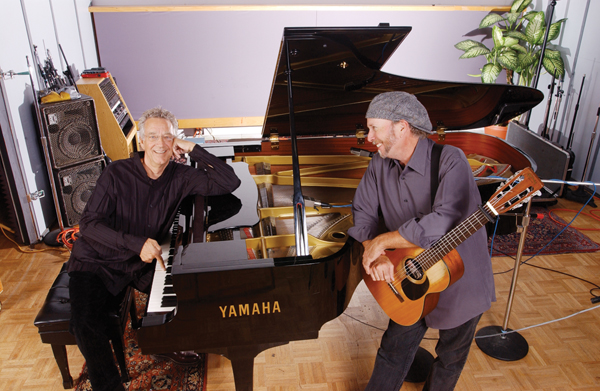 Austin will soon have a chance to rub elbows with a rock ‘n’ roll icon.

Doors keyboardist Ray Manzarek and renowned slide-guitarist Roy Rogers will perform at the Paramount Theatre at 7:30 p.m. on April 23. Along with a performance, the audience will have a chance to ask Manzarek and Rogers questions about their experiences in rock ‘n’ roll.

“We’ll be playing the blues and some Doors songs,” Manzarek said in a phone interview.

The discussion can touch on a wide range of topics from The Doors and Jim Morrison to discussion about life’s meaning and what happens in your mind when you take LSD.

“They’ll be up close and personal with Ray Manzarek and Roy Rogers,” Manzarek said. “We’ll talk about rock ‘n’ roll and Jim Morrison, and there will also be some discussion on why we’re on planet earth.”

Manzarek said the partnership with Rogers lent itself to being more interactive.

“The partnership with Roy is unique,” Manzarek said. “You will be seeing a unique performance right there in Minnesota that you’ve probably never seen anything quite like it before, I might say. This will be a unique experience for (the audience).”

The concert won’t be just be about the past. Mazarek and Rogers are touring to promote their new album “Translucent Blues,” which is set to be released May 24.

Though the two have been playing together for more than five years, Rogers and Manzarek’s partnership started as a fluke when the two were paired in a performance by a mutual booking agent.

“Things kind of clicked,” Rogers said. “From that point on, we just started performing together.”

Rogers said his own slide guitar blended seamlessly with Manzarek’s distinctive keyboard style. Manzarek agreed there was something in the air when the two performed.

“There’s an atmosphere in the air that’s created by people working together, and that atmosphere was passionate and harmonic,” Manzarek said. “We said, ‘Let’s do some more of this.’”

Rogers and Manzarek took the partnership into the studio and recorded “Ballads Before the Rain” as a duet. The duo recently enlisted the help of a backing band and well-known poets to make “Translucent Blues,” which is set to be released May 24.

“It’s a rock and blues thing, but it’s got a very … distinct character to it,” Rogers said of the album.

While Rogers said “Ballads Before the Rain” was more eclectic, he noted “Translucent Blues” is more accessible.

Along with help from the late Warren Zevon, writer Jim Carroll and poet Michael McClure contributed lyrics for the album. Manzarek said it was important for them to have good words for the album.

“Poets have a way of working with words,” he said. “They have a lot to say.”

Though the pair is performing some shows backed by a band, Austin’s performance will be strictly a duet. That style lends itself to a more intimate setting that encourages interaction with the audience.

“It’s a great way for the audience to interact with the performers and we delight in that,” Rogers said. “That’s what that duet is about.”

“People love up close and personal and intimate,” Manzarek agreed.

Rogers said Manzarek is open about his time with The Doors and is very accessible to the audience.

“He manages to discuss it in terms that bring it all the way forward,” Rogers said. “That’s a good thing. This is not a nostalgic thing at all.”

Scott Anderson, Paramount general manager, said he hopes the draws a large crowd because Manzarek is a household name in rock.

“If you’re someone who’s my age and you’re into music, you’re going to know that name,” he said. “Everyone knows The Doors.”

Tickets are on sale at the Paramount for $24.

“We are looking forward to coming out to the Midwest,” Rogers said.

LISTEN IN: Blink 182 drummer misses the beat with solo shot

What do famous drummers do when they get bored? Apparently they record an album with their friends. “Give the Drummer... read more